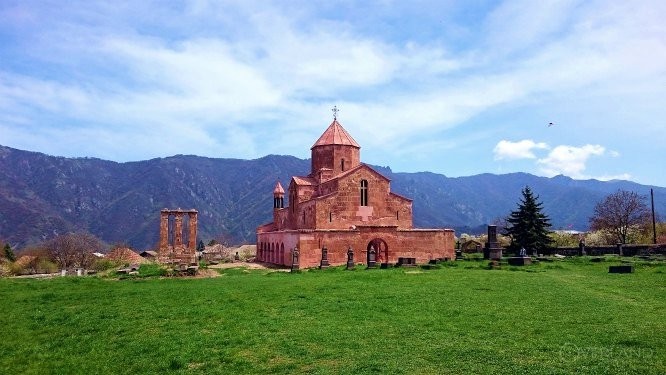 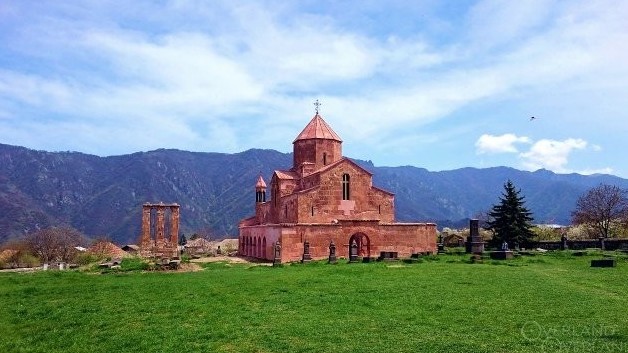 On the left bank of Debet river, on a high plateau, one of the ancient settlements of Armenia is located- Odzun village, in the centre of which, there is a rising monastery, which can be seen from every angle of the village. Odzun monastery is surrounded with a wall, and if we look at it from the main entrance, we can see a majestic view- St. Astvatsatsin church in the background of high mountains covered with forests.

With none of the Armenian church foundation dates arose so many disagreements, as with the foundation and rebuilding of Odzun monastery. According to the XIII century historians, the monastery was rebuilt in the VIII century, but architectural analysis and wall inscriptions show that the monastery was built in the V century, in a place of an old church, which was built by Gregory the Illuminator and Trdat III.

The monastery has reached our days almost not destroyed.

St. Astvatsatsin church is a domed basilica. Early Christian bas-reliefs of different themes were preserved on the walls of the church. The church differs with its simplicity and spacious forms, an abundance of light and shadow.
At 10 m from the church, on the north-west, stands an early Christian monument-sepulcher of the V-VI centuries, which depicts scenes of the spread of Christianity.

During the excavations, early medieval pottery wares and khachkars, as well as a cross(a copy of which now stands on the church) were found on the territory of the monastery.

In Soviet times, the church was used as a warehouse for cement and wheat, but due to a careful treatment of inhabitants, no stone was damaged.

There is an interesting story about Odzun. Old inhabitants tell that during the Great Patriotic War, the old bell of St. Astvatsatsin church was melted and used as a military column of Sasuntsi David.