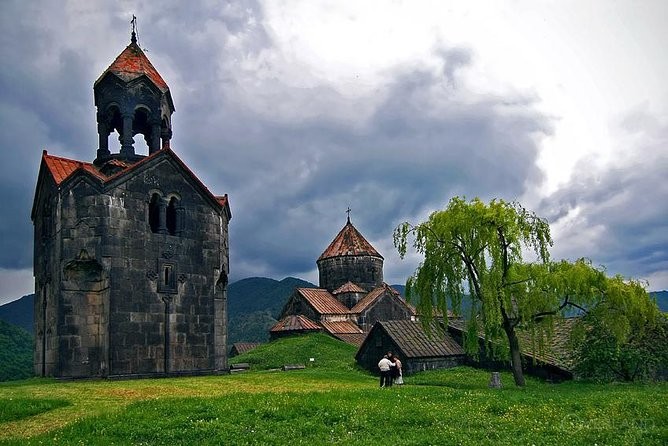 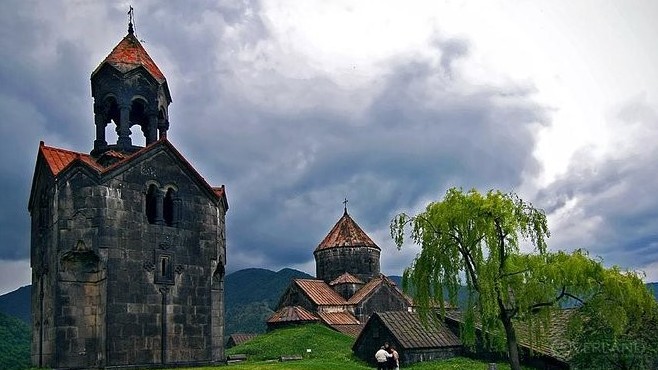 Haghpat Monastery, one of the main spiritual, scientific and cultural centres of medieval Armenia, today is one of its most significant sights.

Haghpat is situated on the south-east edge of the spacious plateau- turned to the western slope of mountains covered with forests. On the southern part the plateau is bordered by Sehem ,on northern by Hram , on western by Debet and Cayeno gorges, and with its high and impregnable cliffs. The mountains St. Luso and Terunakan rise on the eastern part.

The Sun, which rises from the high mountains, lights up Haghpat village and its surroundings. And because of this Haghpat was also called Srblis or Surb Luys(Saint Light). After the monastery was built, people started to call it Haghpat and the name Srblis passed to that mountains.

There are some versions of the origin of the name "Haghpat". According to one of these versions, Haghpat is a victorious wall (haghtakan pat- Haghpat). Another version says that 2 masters- father and son, who built Sanahin monastery once argue with each other, after which son leaves. On his way, he's hired to build another monastery. When the walls that were built by son rise so high that it could be seen from Sanahin monastery, the father goes there, looks at his son's work and says <<Ax Pat>> which is translated as <<Oh, the wall>>>.

According to another version, the name Haghat is associated with the word haghb, which means sinful life. This means that people went there in order to leave their sinful life behind.

Despite the fact that the official date of Haghpat monastery foundation is considered to be 976 when Surb Nshan church was built, people had lived here long before that. It is evidenced by the archaeological finds of the Bronze Age. And the area of Debed river evidences about people of the Stone Age.

The monastery of Haghpat was built by architecture Trdat. It is considered his first masterpiece.

After the decay of Bagratuni kingdom, the monastery was in decline, but in the XI century, under the dynasty of Zakaryans, it flourished and became the Mother See of the Diocese of Lori. The monks here were engaged in the rewriting of manuscripts and miniatures. It is worth to mention that at this time, despite the spiritual studies, they were also studying sciences, such as mathematics, astronomy, medicine.

On the eve of the Mongol invasion, in 1232, not far from the church they built Kayan- a fortress for the monastery protection. The monastery was also damaged during the invasion of Tamerlane (XIV century), during the wars between Ottoman Turkey and Safavid Iran (XV-XVII centuries).

After the restoration of peace, East Armenia passed to Iran, the monastery was rebuilt and became an important spiritual and cultural centre. Sayat-Nova had been living here for a long time.

In 1996, Haghpat Monastery was included in the list of UNESCO World Heritage Monuments. Constructions built at different times formed the current appearance of the monastery complex of Haghpat. Despite the asymmetry of the building, the complex is a holistic system, separate parts of which are pefectly combined with each other and with the surrounding nature.

St. Nshan church
It is the monastery's survived church, which was built at the end of the Xth century. It occupies a dominant position, around which, later the entire complex was built. Outside, the church has a rectangular form, but inside it has the shape of a cross. The dome is kept by high arcs, elegantly curved into triangular shapes.

Surb Astvacacin church
The church was built in 1208-1220. The church inside is cruciform.

The library(Book Depository) adjoins to the northern wall of St. Nshan church. It was built in the XI century. Haghpat library was one of the richest libraries. In the XI-XIII centuries, most of the Armenian manuscripts were kept her. In this way, Haghpat was the first Armenian Matenadaran. The book depository(library) represents a great interest. A lot of books were kept in karases (large clay conical vessels) that were dug under the ground. Also, in karases and other places, various food was kept. This provided optimal conditions for both manuscripts and food.
The library and St. Nshan are connected with each other by the gallery, which bears the name of Savior. Khachkar Amenaprkich(Holy Saviour) is situated here and based on human faith, it has the power of curing diseases and helping pure aspirations.

The porch of Hamazasp stands north from St. Nshan. It was built in 1257. The arcade connects
St. Nshan church with the porch. Due to the fact that the building is squat, the edge of the roof rests on the hill slope. Hamazasp porch is interesting from an engineering point of view. It had survived loads of earthquakes and little invasions. Until now the building is being studied by architects to understand the principle of earthquake-resistant.

Ukanants sepulcher is situated north-west from the porch of Hamazasp. It presents 3 little chapels. The lower construction dates back to the VIII century, and the upper to the XIII century.

Haghpat belfry together with Sanahin belfry is the oldest in Armenia. It was built in 1245.

St. Grigor church was built in 1023-1025. This is the first church that we see entering the monastery. The bare walls are decorated with frescoes.

The porch of St. Nshan church was built in 1208-1209. The structure is unique for the architecture of porch- arches rely on walls, and only in one, western part - on massive columns. The porch had a great influence on the architecture of medieval Armenia, especially on its civil structures. Also, the stones with various shades that were used in the porch construction are interesting.

Fortress walls were built after the construction of St. Nshan church and date back to the X-XI centuries. The walls of the monastery have been rebuilt many times. The initial materials that were used to restore the monastery are- cyclopean stones, black and red tuff.

The chapel of St. Jrashen or St. Astvatsatsin- it's a small chapel, outside the monastery walls. It was built in 1195. On the western facade, there are some khachkars.

The Spring House is about 75 m beyond the eastern gate. It was built in 1258.

Also, the remains of the VIth century church were found on the territory of Haghpat village. People think that it's the 1st Christian church in Haghpat.