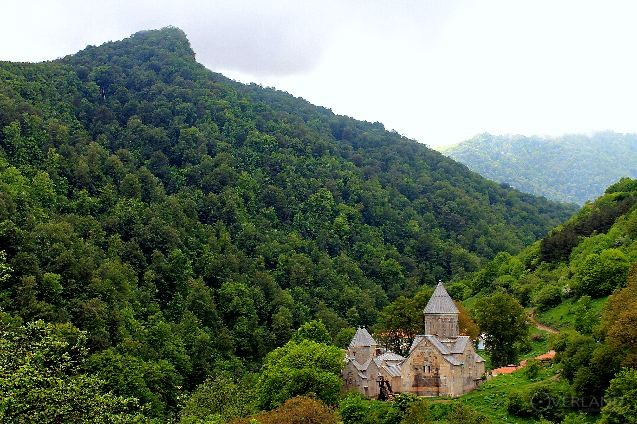 At different historical times, 3 different churches were built in the monastery, which along with two porches (one of them is destroyed), the dining-room, prayers and khachkars form the ensemble of Haghartsin monastery complex. Besides the fact that the monastery was one of the spiritual, scientific and cultural centres of the Middle Ages, it is a unique monument of Armenian architecture, one of its masterpieces.

The monastery experienced its real dawn in the XII-XIII centuries.

The oldest structure is St. Gregory the Illuminator church, which was built in the X century.
St. Gregory church is rectangular outside and  cruciform inside. The church is decorated lowly, the only decorations are bas-reliefs in the corners.

From the western side a porch, built in the XII century, adjoins the church. On the ceiling, there are preserved bas-reliefs depicting people, birds, angels, etc.

The main church of the complex is St. Astvatsatsin(Holy Virgin) church. The official date of the church's foundation is 1281, but for some reason the church was built in the X-XI centuries, and only in 1281 it was rebuilt. The church has a domed hall. All walls, except the western one, have Armenian niches. In front of the western wall, there are preserved ruins, which probably remained after the destruction of an old porch.

The dining hall is one of the masterpieces of Armenian constructional skills. The second structure of this kind is situated in Haghpat monastery.

Also, in the monastery complex of Haghartsin, there are several ruins, which, probably were domestic buildings.

A bronze cauldron with a weight of 350 kg was found in the monastery. It was made in 1232. Most likely, it was used for making myron. Now, the cauldron is kept in the History Museum of Armenia.