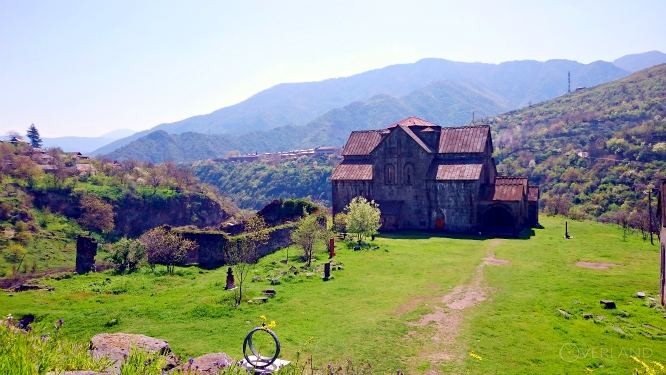 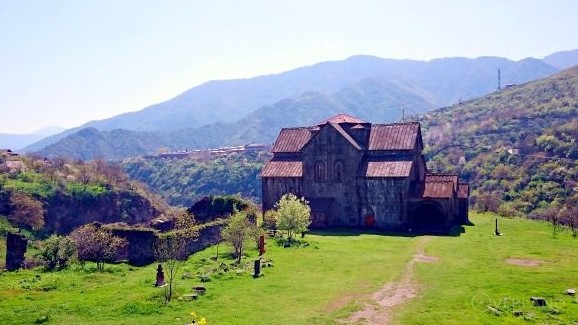 The monastery of Akhtala is in Akhtala village, on a top, surrounded with deep gorges. We can get information from historical sources, that as a settlement, Akhtala existed in the V century and was called Agarak.

The settlement was formed around a copper mine, which was used here from the immemorial times, but even before that, there was a fortress here, and long before that there was a Zoroastrian sanctuary.

The region called Tashir-Dzoraget bordered with Georgia, and because of this Armenian and Georgian culture and traditions are historically intertwined here. Today, the monastery of Akhtala is half-destroyed complex, on the top of a cliff. On the cliff's foothill, we can see an abandoned mine, where once copper and other metals were mined. The fortress walls, monastery gates, and the tower give an impregnable look to the monastery. The fortress was built in the X century and was included in the defensive system. It controlled the passages to the river gorge. The fortress walls stretch from north to south, through the whole perimeter of the cliff. The main entrance, situated on the northern part is a vaulted hall, on the east side of which a three-story pyramid-shaped tower rises. From three sides, Akhtala fortress is surrounded by gorges. This gives natural protection to the fortress. It is harmonious with the surrounding nature. Akhtala fortress is one of the comparably well-preserved fortresses in Armenia.

Inside the fortress, there are- the main temple, the small church of St. Basil Church and the ruins of a 2-storey residential complex. Besides, there are 4 small church-chapels, located on different sides of the monastery.

Initially, the church was called Pkhndzahank(copper mine), because it was close to the copper mine, where people mined copper from the ancient times. First, the name of the monastery was mentioned in the inscription on the khachkar, from here it becomes clear that the church of Holy Virgin was founded in 1188. From the same source, it becomes clear that the church was Armenian Monophysite Church. But there's a question remained- is this the founding date of the whole monastery? Later, the ruler of the region, Ivaneh Zakaryan, gave the monastery to Chalcedon and built a temple, at the entrance of which he was then buried. It was about in 1227-1231. This is the main temple of Akhtala, which differs from other structures with its large sizes and Georgian decoration. Perhaps, the Chalcedonian temple of Holy Virgin was built in the place of a prior Monophysite "Mother of God of Pkhndzahank".
We don't know for certain when Pkhndzahank was renamed to Akhtala. It's only known that in the XII century it's still mentioned as Pkhndzahank, and in the XVIII century it's already called Akhtala.

The main church of Holy Virgin stands in the centre of the fortress. The church has a dome structure with two octahedral pillars. The dome wasn't preserved.

According to some sources, Georgian king Vakhtang Gorgasali built a church in Agarak, in the V century. But archeological excavations show that this church was completely destroyed. So far, the church wrecks were found in the neighboring gorges.  Some wrecks were used for building houses, and also for the construction of the fortress wall.

In the monastery complex of Akhtala, some scenes of Sergey Parajanov’s film “The Color of Pomegranate” were shot.