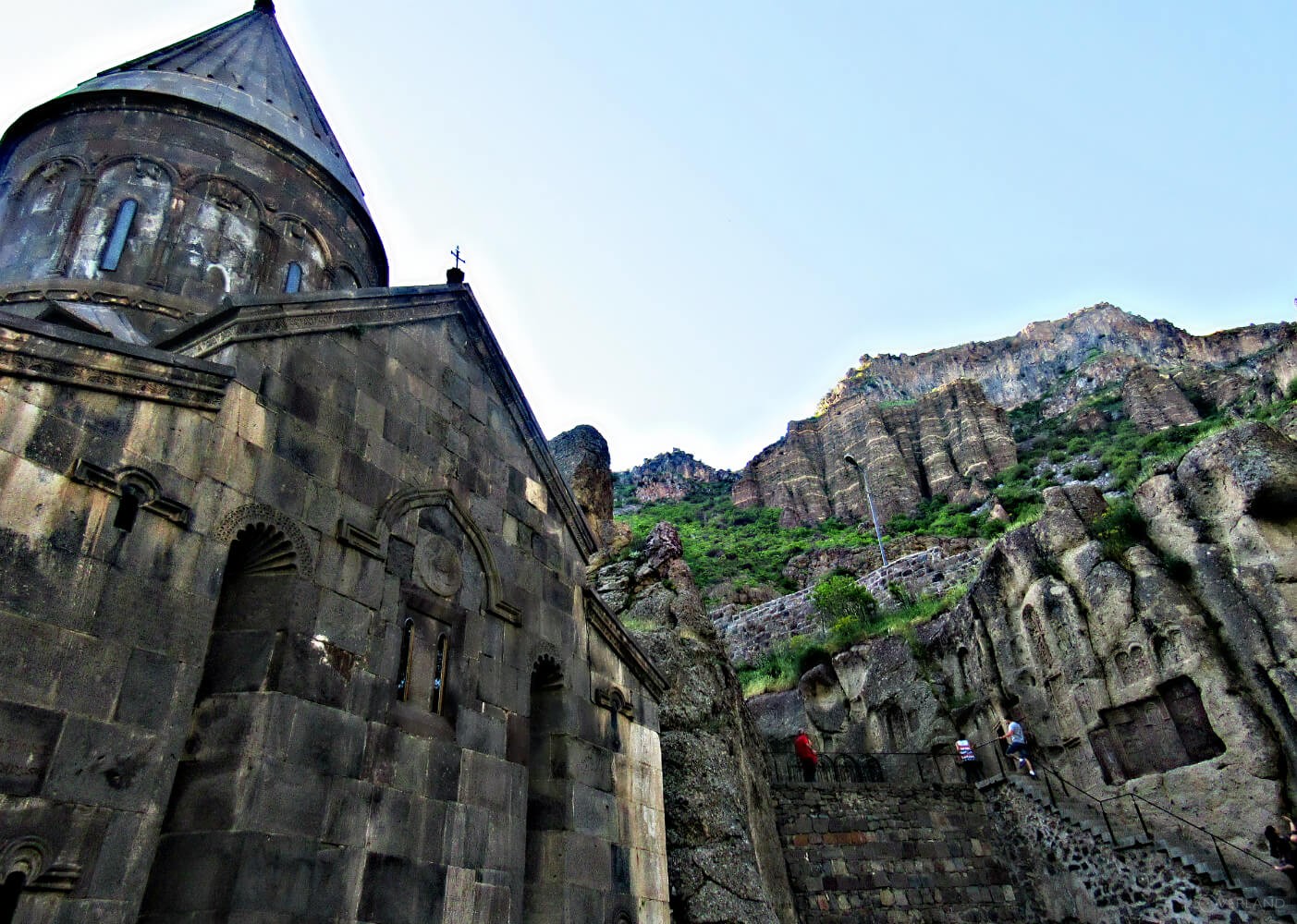 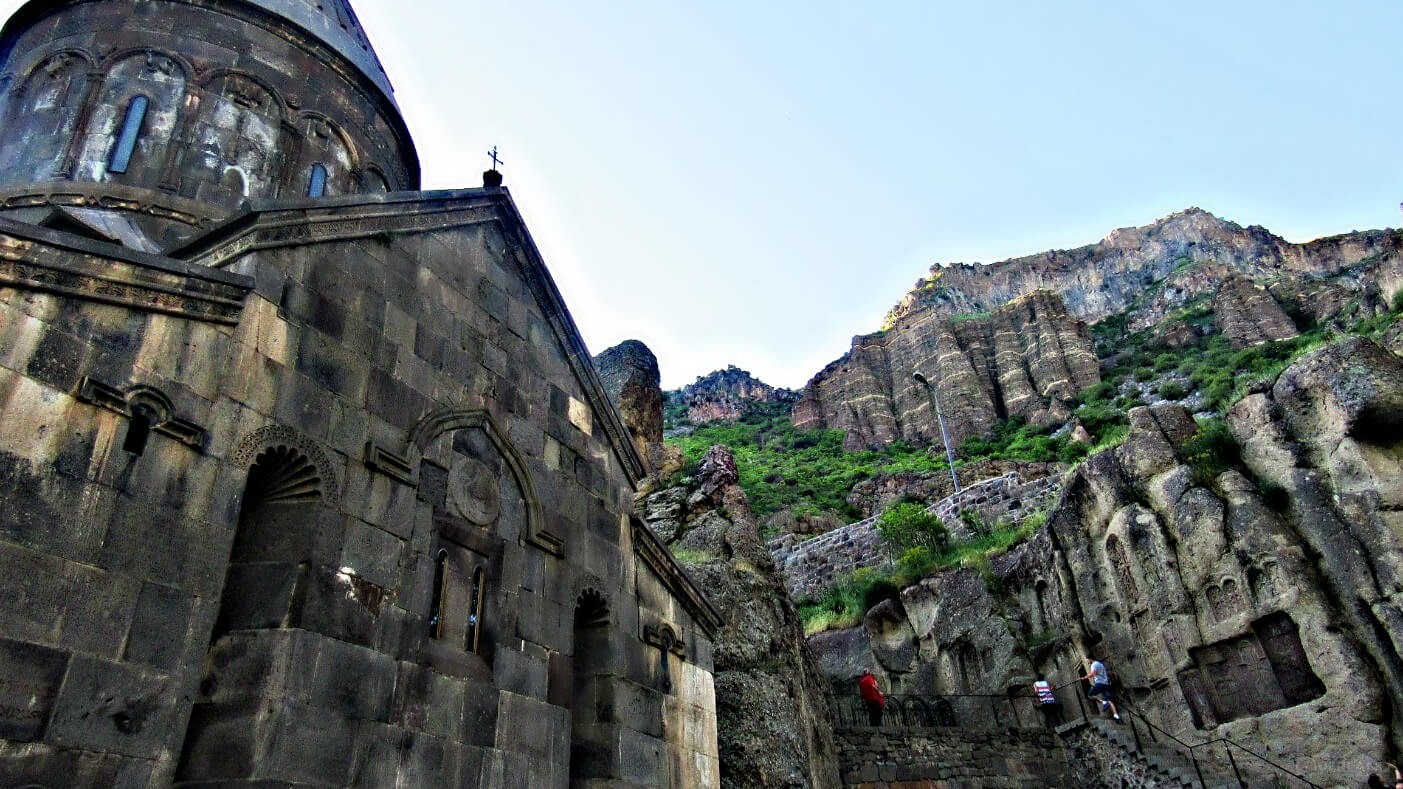 Like many Christian monasteries, Gegard was founded in the place of an ancient shrine, but this place was considered holy. Its cave part has reached us in almost the same form as it was in the 3rd millennium BC, except the crosses painted already in the Christian period.

The monastery of Geghard is located in Kotayk region of Armenia, in the gorge of River Goght. If you choose the asphalt road, then passing along the serpentine, you will get to Geghard monastery at the end of the gorge. And if you choose to hike through the gorge, the river, picturesque rocks and caves will accompany you all the way. The caves in the rocks served as houses in ancient times, prisons in the Middle Ages, and during the attacks of enemies- as safe shelters.

On the way- at the entrance to the gorge, at the end of which the monastery stands, there's a figure of a lioness. It is taken from the coat of local princes and can also be seen on one of the walls of the monastery.

The desire of Armenian masters to build monasteries and temples in harmony with the surrounding nature is best presented in Geghard.

The place, where Geghard or Ayrivank monastery stands is surrounded by high rocks on three sides. These become the continuation of the monastery.

Like many Christian monasteries, Gegard was founded in the place of an ancient shrine, but this place was considered holy. Its cave part has reached us in almost the same form as it was in the 3rd millennium BC, except the crosses painted already in the Christian period. It is known that in ancient times this place was considered sacred also due to springs, one of which still flows inside the main porch of the cave monastery.

The first Christian church here was built in the IV century, according to the legend, the monastery was founded by Gregory the Illuminator, immediately after the adoption of Christianity as the state religion. Initially, the monastery was called Ayrivank, which means ''cave monastery''. At the beginning of the monastery foundation, the monks lived in caves that surrounded the monastery. The monastery was famous as a centre for creating manuscripts, as a school, a music academy and a place of pilgrimage.

When the Arabs invaded Armenia in the 10th century, the monastery was plundered, and many manuscripts were lost. Throughout history, it was attacked by the Mongols, Tamerlane, Seljuk Turks, and was repeatedly destroyed by earthquakes. Even though that the inscriptions preserved in the territory date from 1160, the new complex (not a cave) was built in the XIII century.

Until the XVIII century, the spear, which pierced the body of Christ was kept in the monastery. According to the legend, Jude the Apostle brought the spear to Armenia. Due to this, the monastery got its second name - Gehard or Gehardavank (gehard-spear, vank-monastery).

A small part of the Noah's Ark was also kept here. Due to these two relics, the monastery got great fame. The spear is now kept in Echmiadzin and is used to illuminate the sacred peace. The oldest (1164) preserved monastery structure is considered to be the chapel located outside the walls of the monastery, to the left of the entrance, partially carved into the rock, on the walls of which there are inscriptions about donations from the XII-XIII centuries.

In the XIII century, the main complex of the monastery was rebuilt. This included the main church (Katoghike), the porch, two rock temples, the church-tomb, and cells. Later (XVII century), residential and farm buildings were built near the wall.

According to the inscription on the top of the western entrance, the main church was built in 1215. The internal decoration is typical for the architecture of the XII-XIII centuries. The church has a cruciform shape inside, and a rectangular form outside. The dome is built in the centre of the cross. The left entrance of the church is richly decorated with patterns, on top, there are a lion and a bull, the symbols of the Zakaryans house. On the western and southern walls, there are Armenian niches, which have seismically stable importance.

The porch of the main church was built in 1215-25. Between the porch and main church, on the right side of the entrance, stands one of the most famous khachkars of Armenia, made in 1231.

The alteration inside the cave part started in the XIII century. The skill of builders, who were able to accurately recreate all the features of the Armenian church inside solid basalt, is surprising.

The first church in the rock was redone in 1230-50. The entrance to the church passes through the main porch. From the northern rock wall, there's flowing water, which is considered sacred and miraculous from pre-Christian times. At the entrance, you can see a bull's head, which holds two chained lions. Below, there is an eagle with spread wings and a lamb in its claws. This is the family coat of the Proshyans princely house.

Around the monastery, there are chapels inside the rocks, cells, crosses, and khachkars fixed on the rocks. Most of the khachkars are painted with red Armenian cochineal. East to the main church, there is a stone staircase, at the top of which there are also caves in which, according to a legend, Gregory the Illuminator lived. On the north side of the monastery, there are high vertical cliffs, and on the other side, it is surrounded by a stone wall.

Besides the official history, there is a national legend about Geghard foundation. According to it, a brother and sister from a noble family decided to leave worldly life and build a monastery in the gorge. They asked God to help them. Waking up in the morning, they found their pickaxe on the top of a mountain. But due to hard work, brother hollowed-out rocks with his sword, and sister carried stones with her hair, gradually they built a temple in the rock.

According to another legend, in the northern rocky church of Geghard, a treasure was kept. Actually, the architects used light effects and made it so that the light from the hole in the roof fell so that it looked like a diamond. Hearing this, Tamerlane wanted to overreach it, but entering the church, he closed the light and the "diamond" disappeared. He tried to take the brilliant three times, but the diamond disappeared every time and finally, he decided to leave without destroying the monastery. After the 1679 earthquake, the position of the stones was broken and the "diamond" disappeared.

Geghard Monastery is included in the UNESCO list as a World Heritage Site. 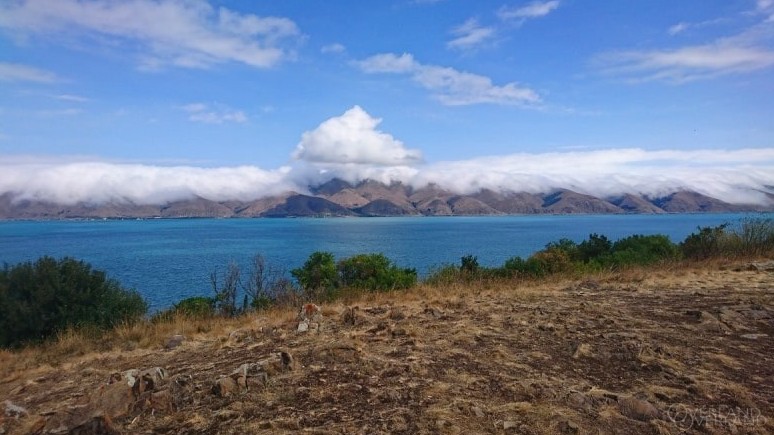