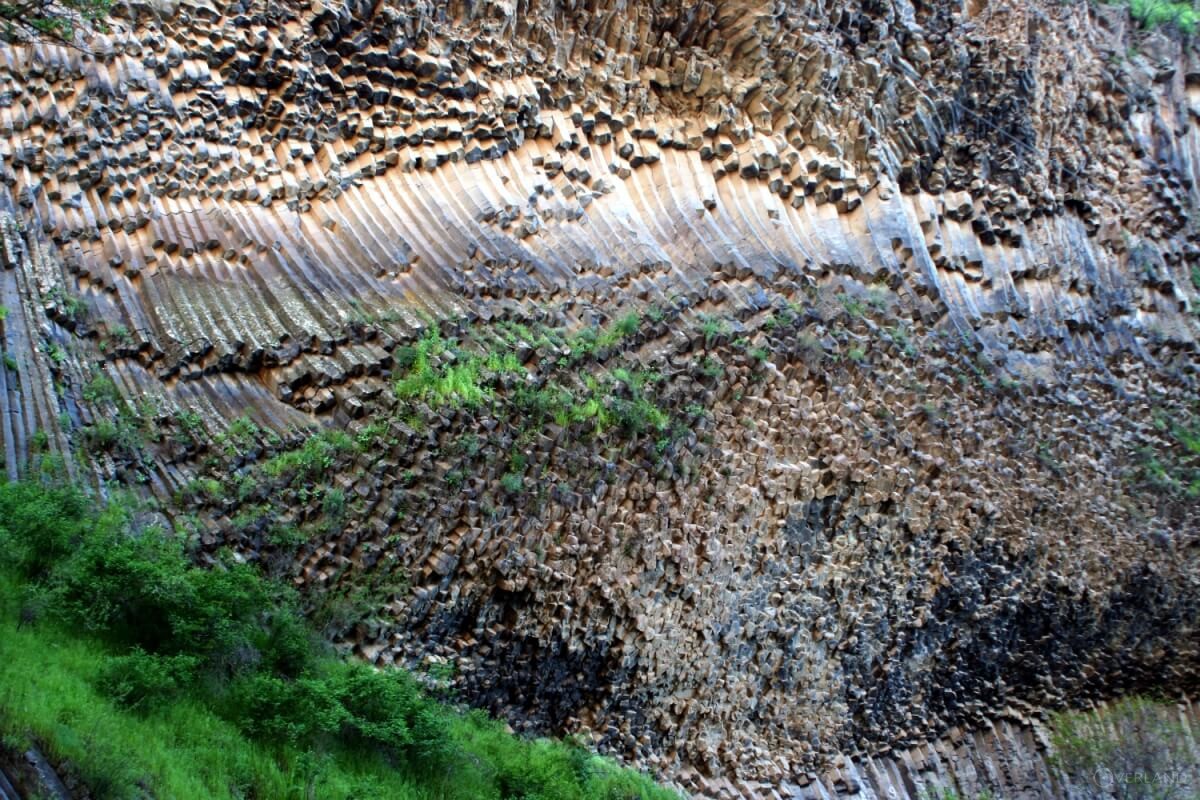 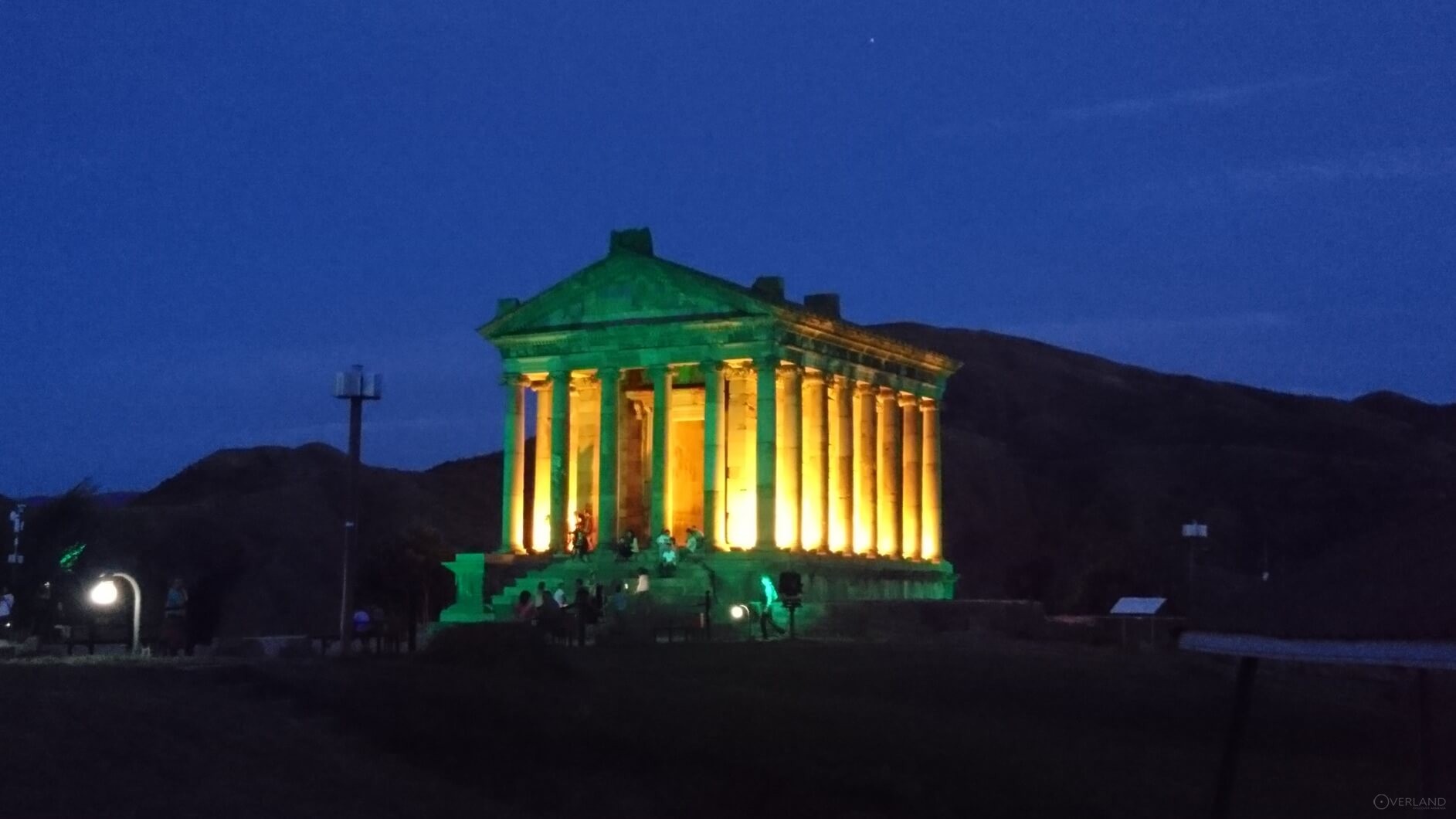 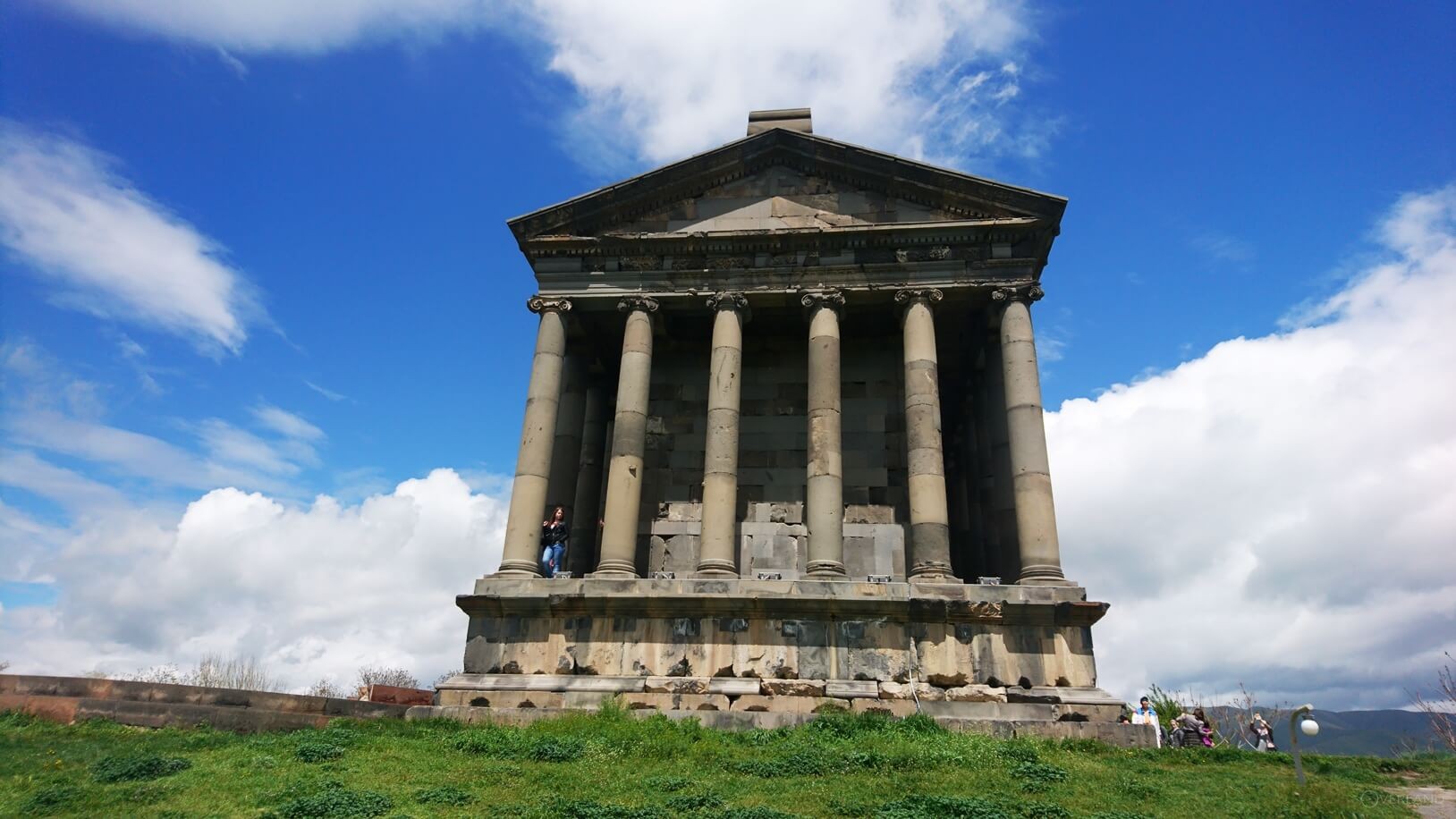 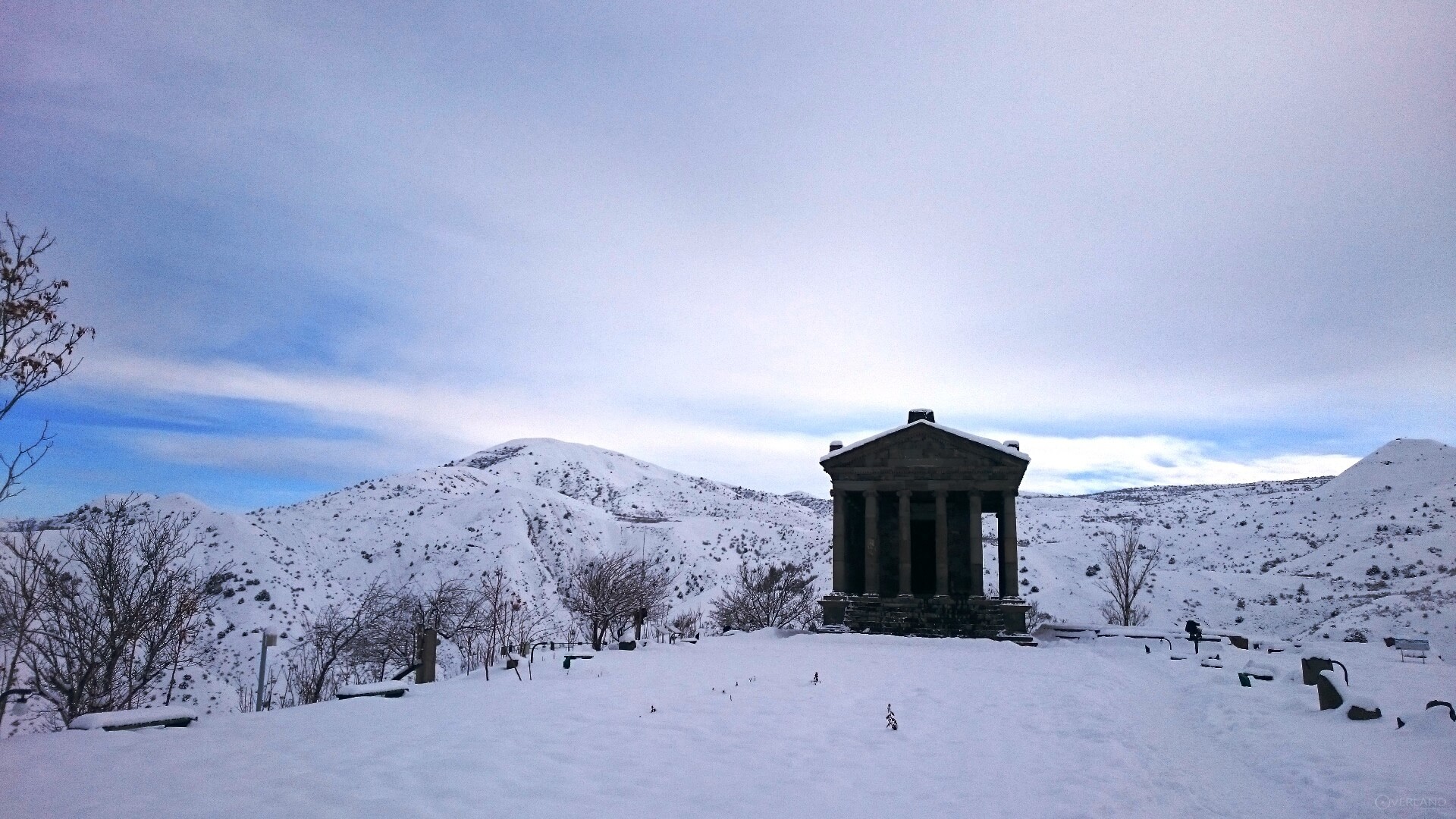 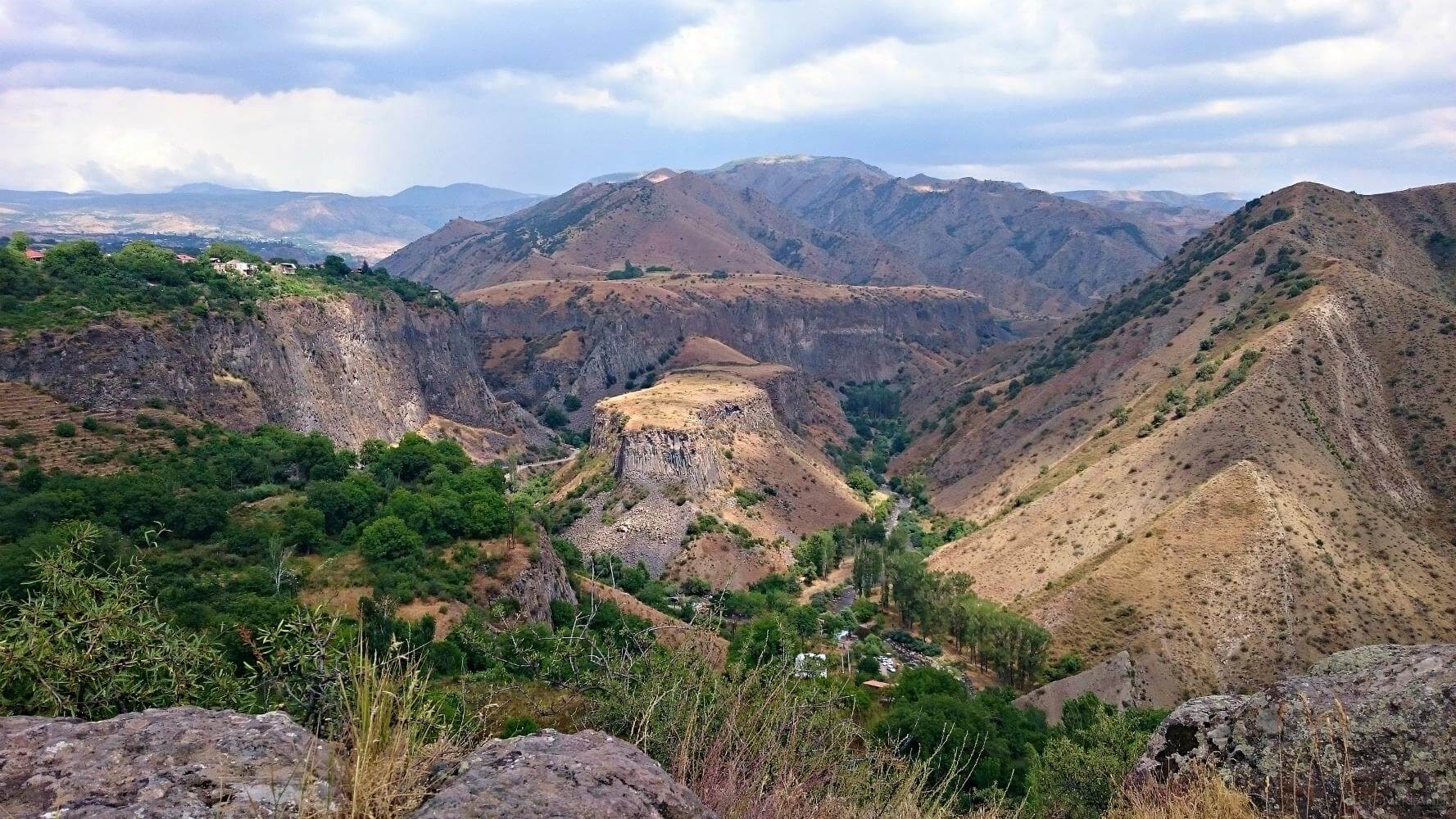 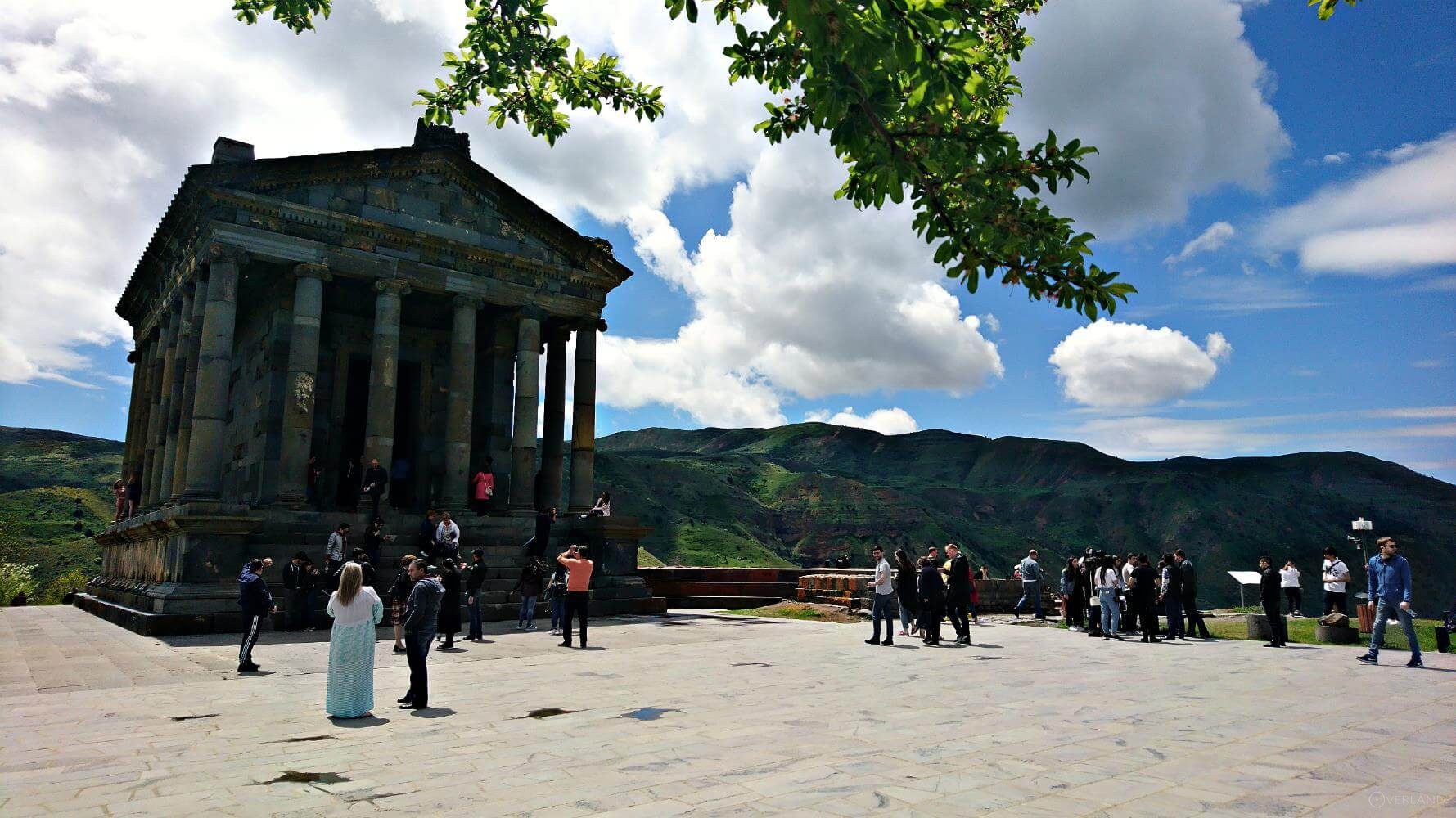 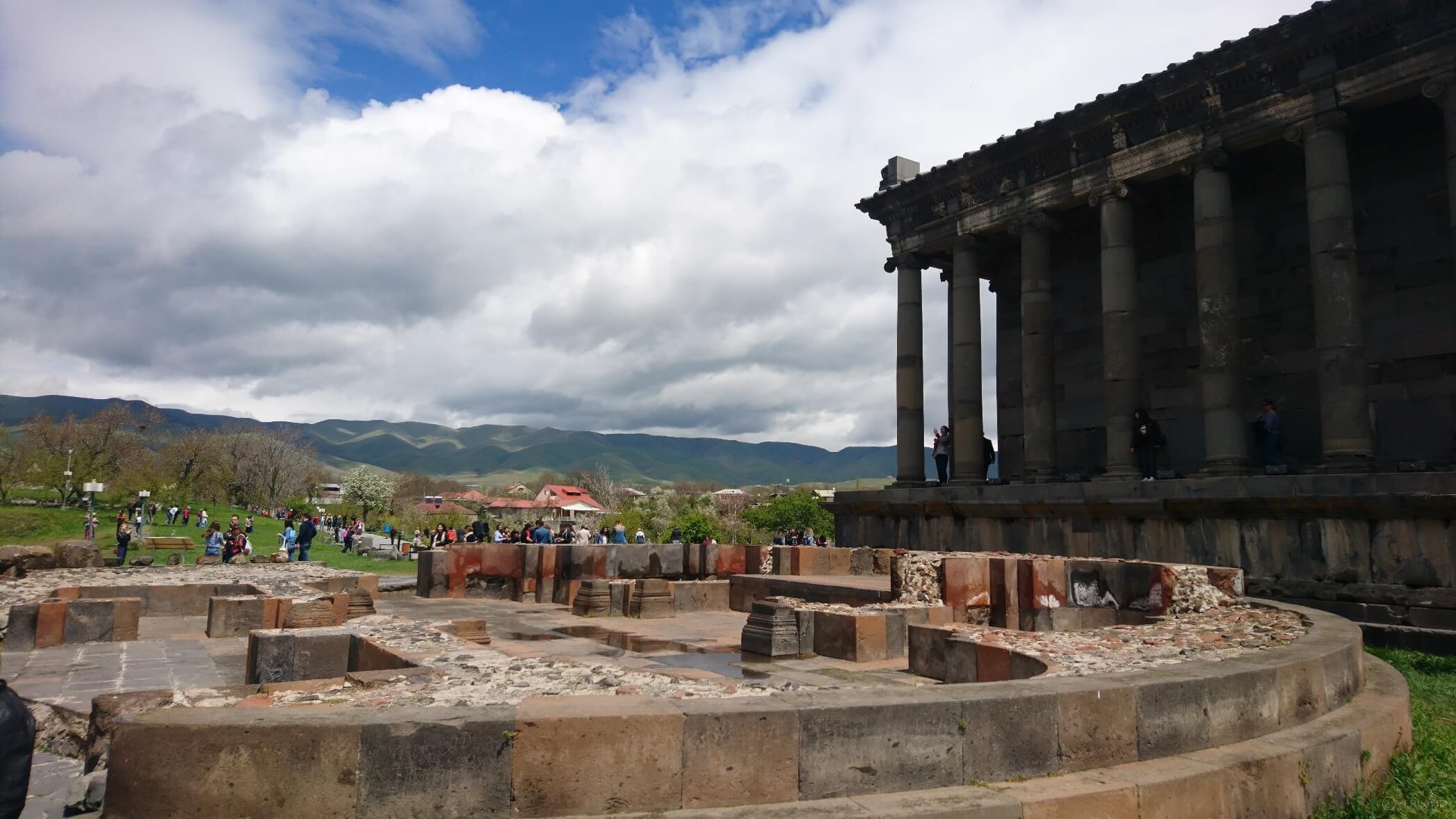 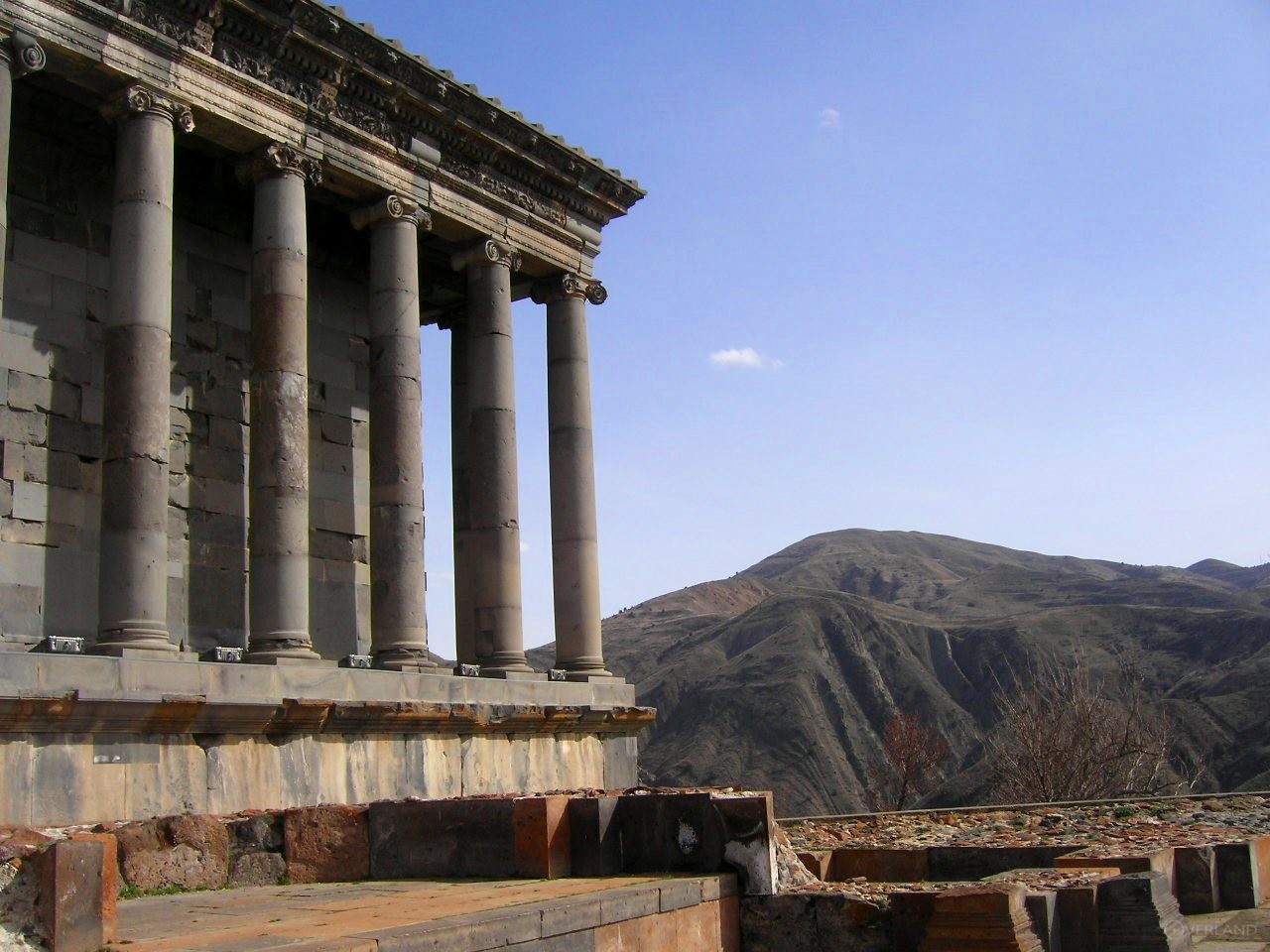 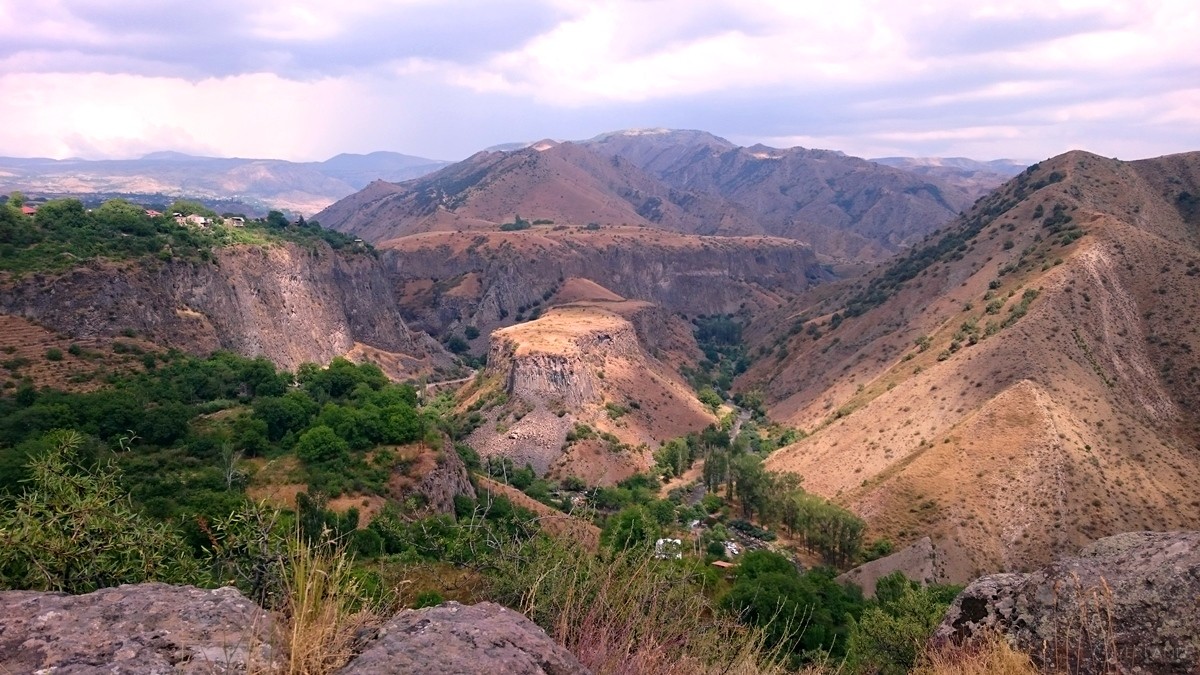 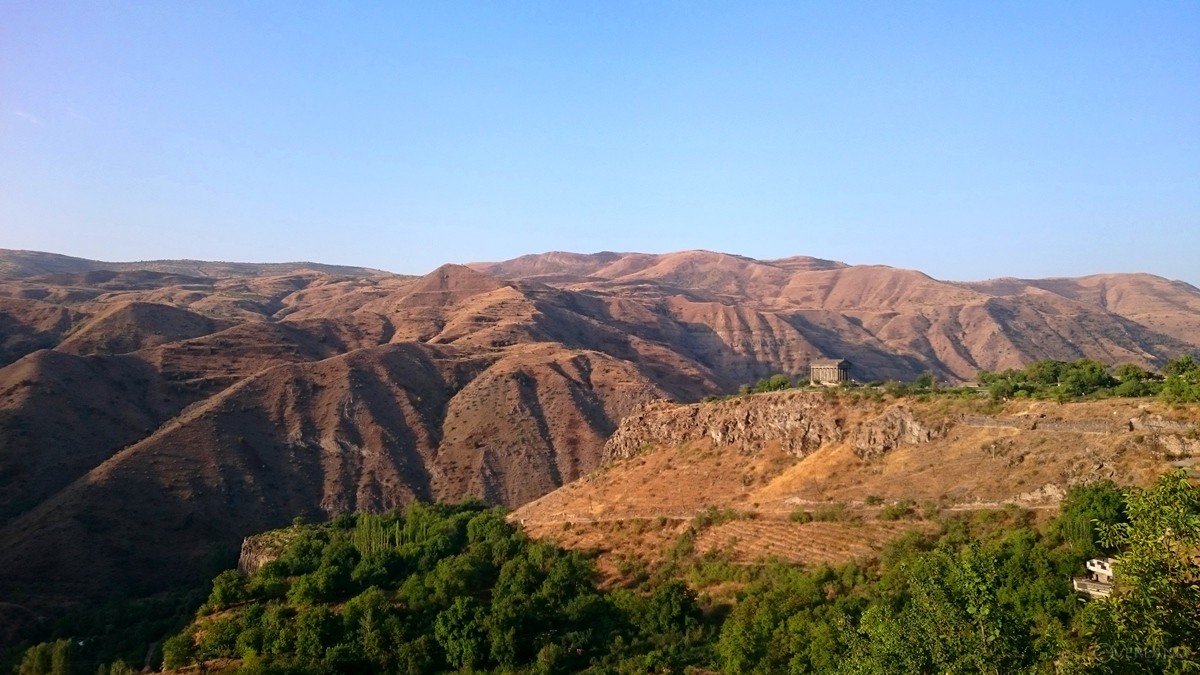 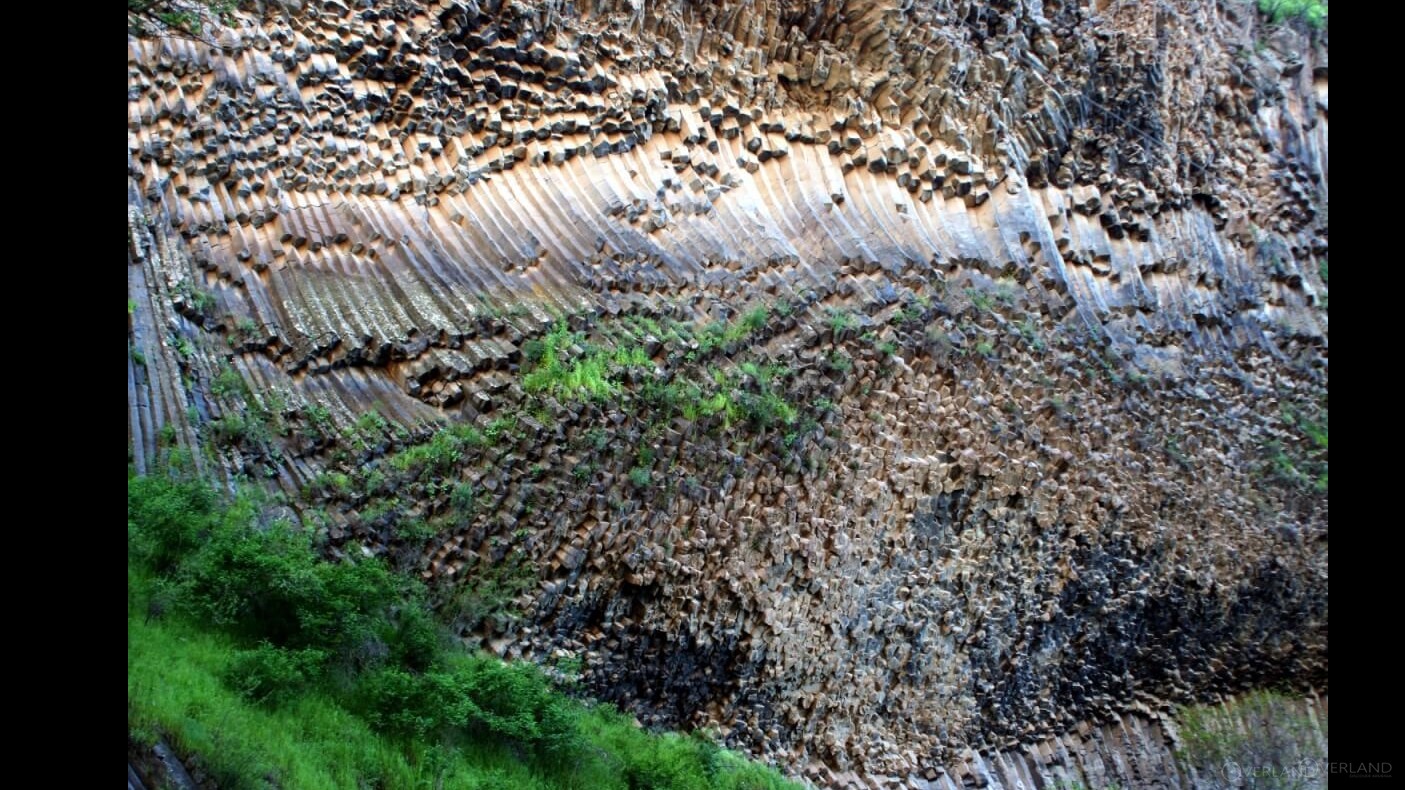 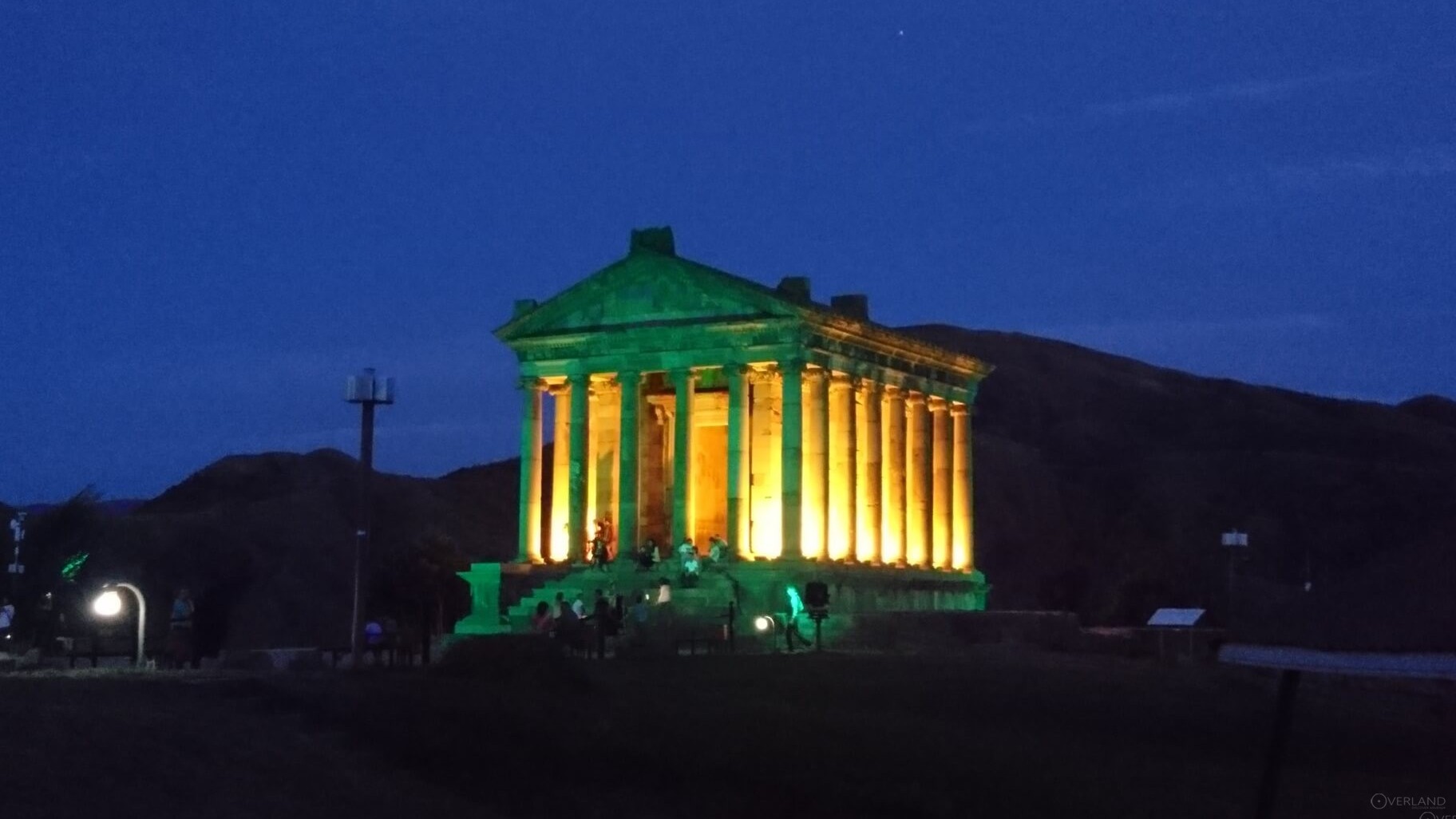 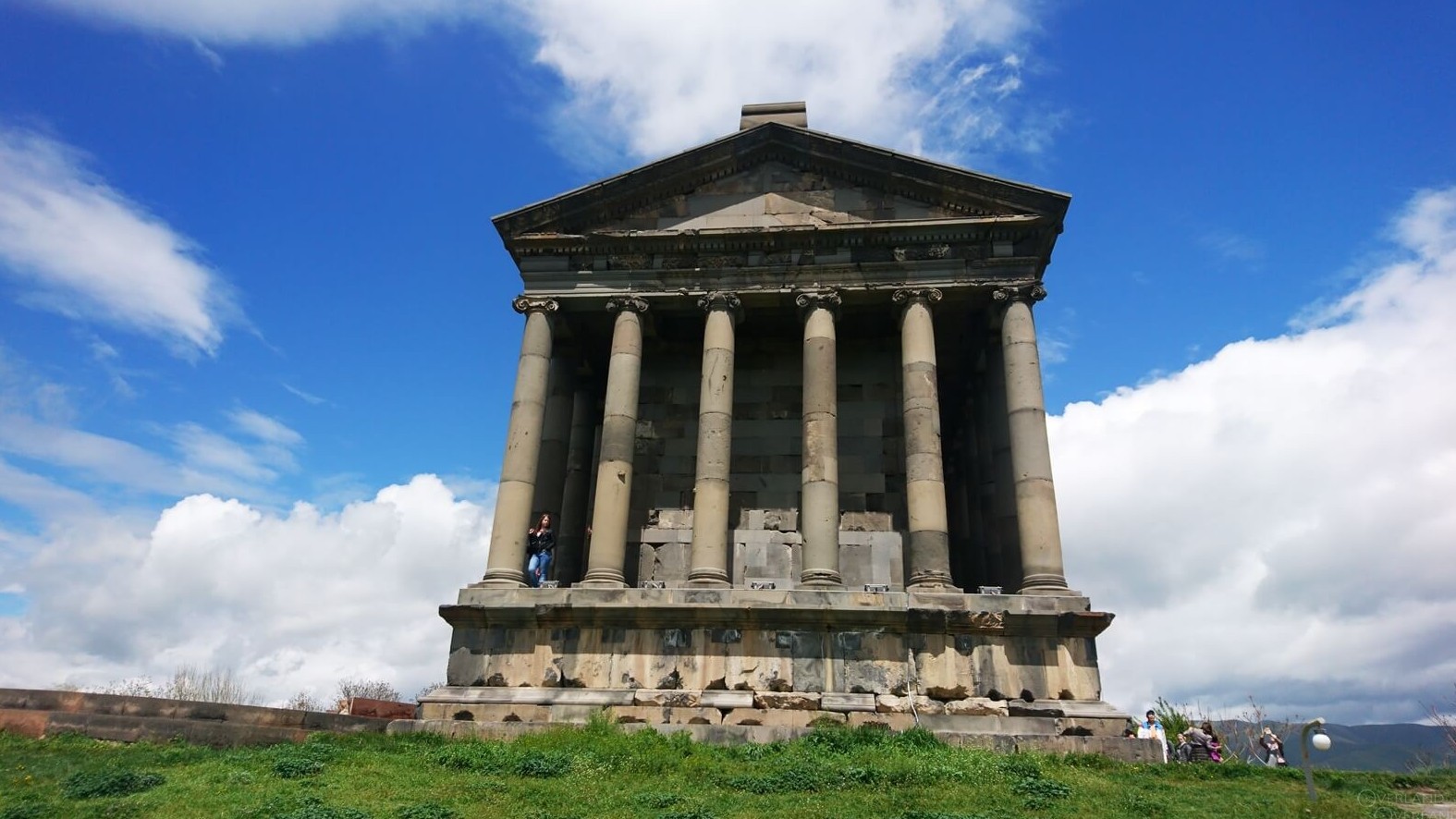 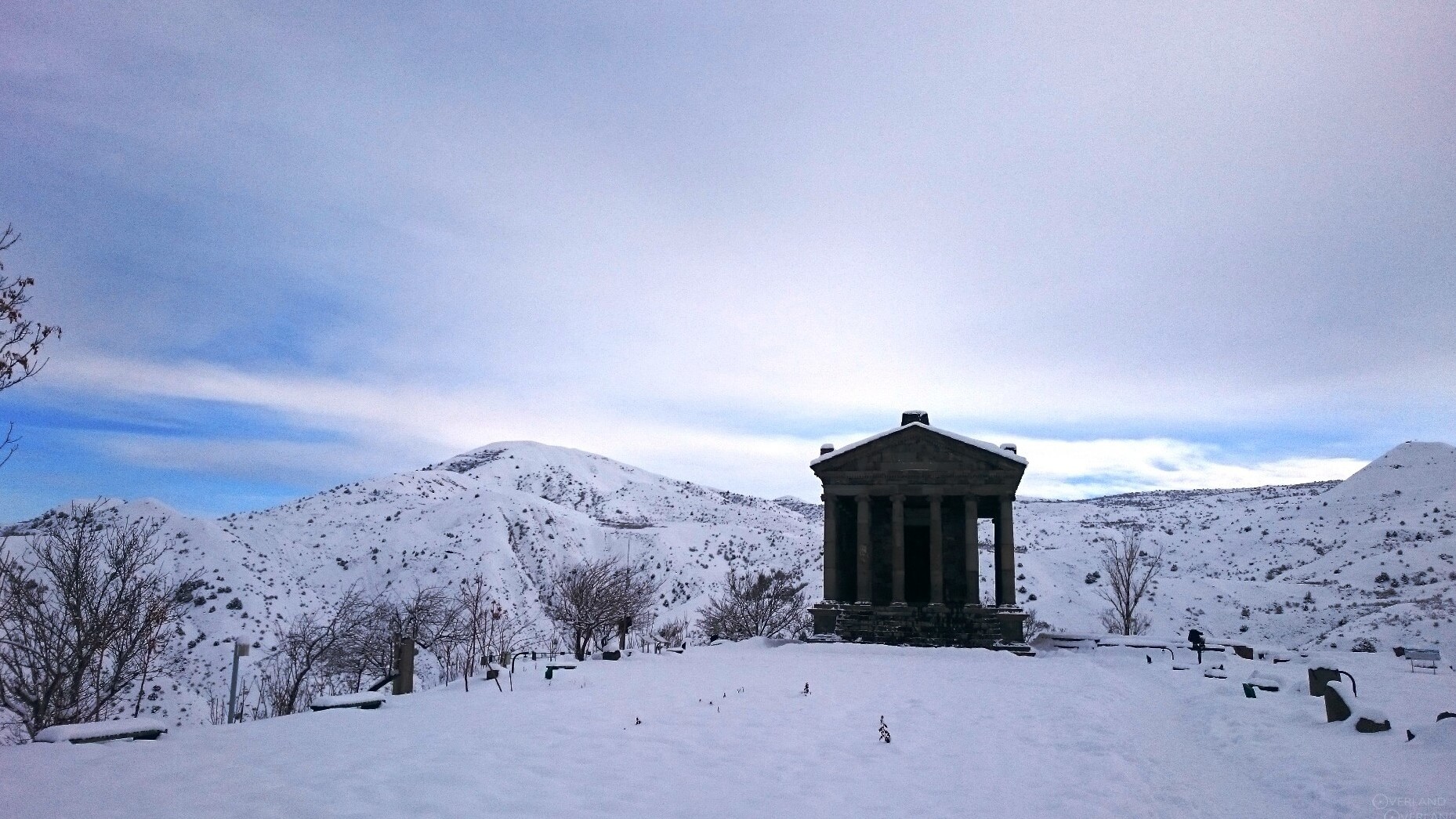 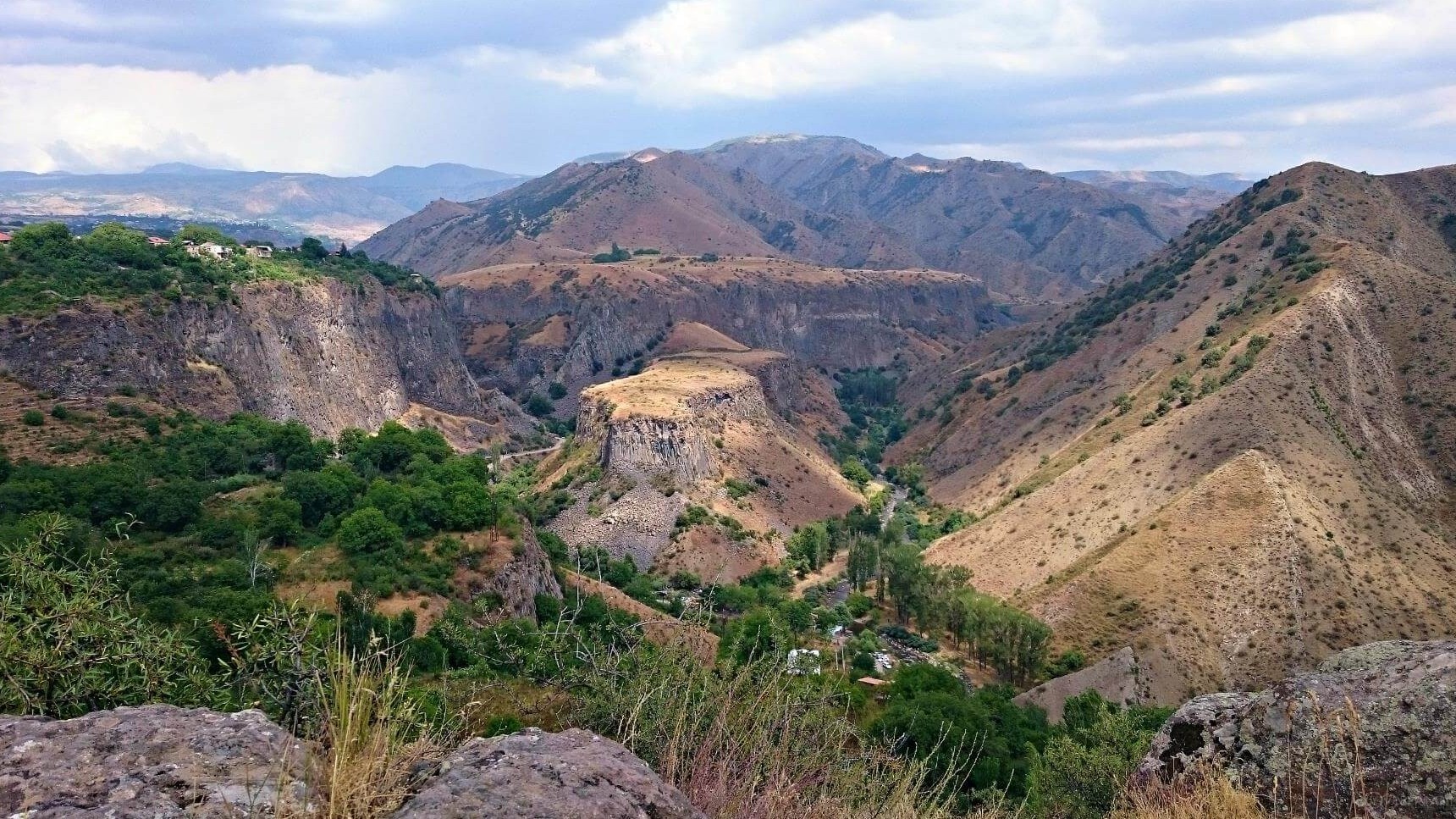 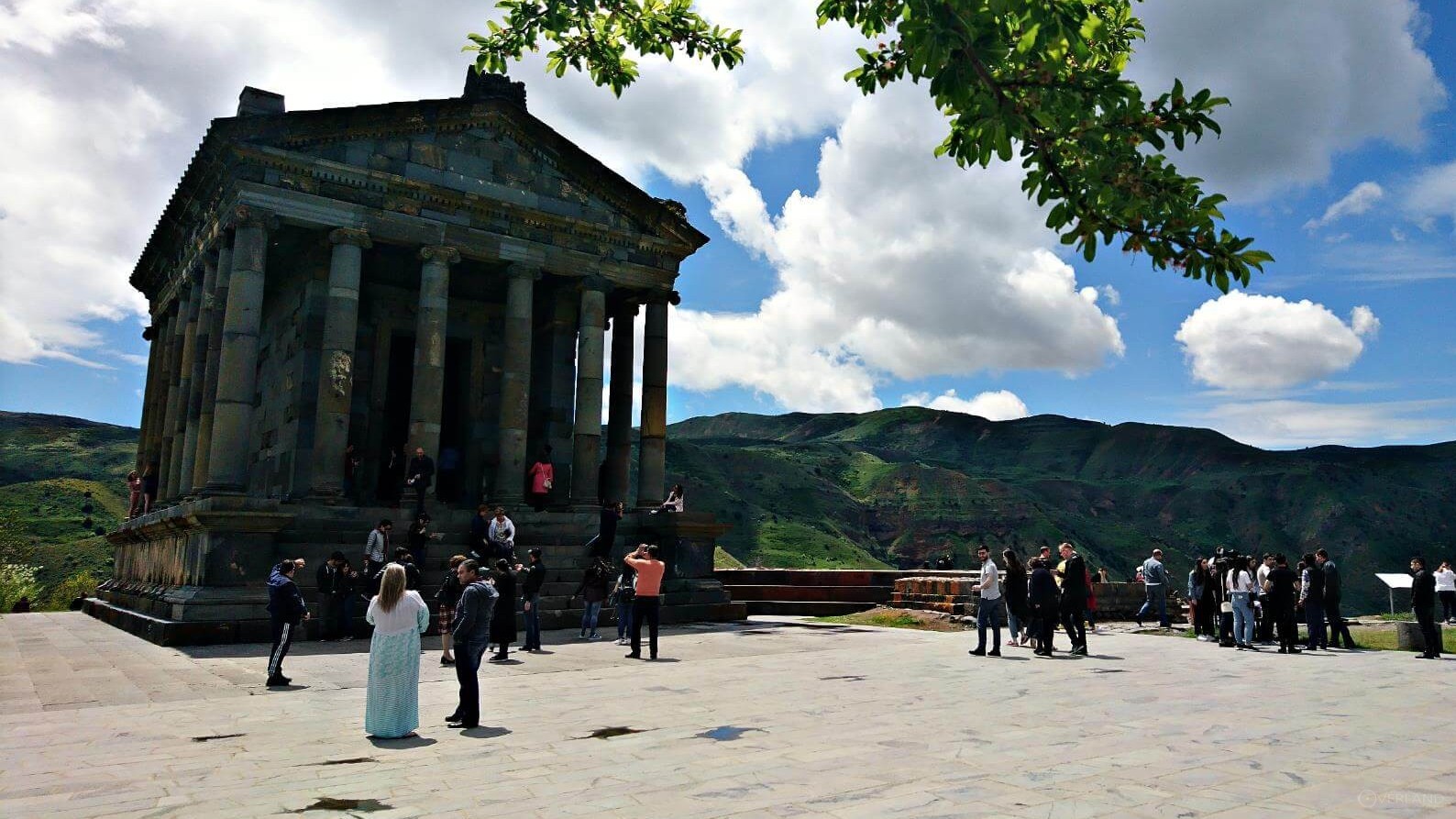 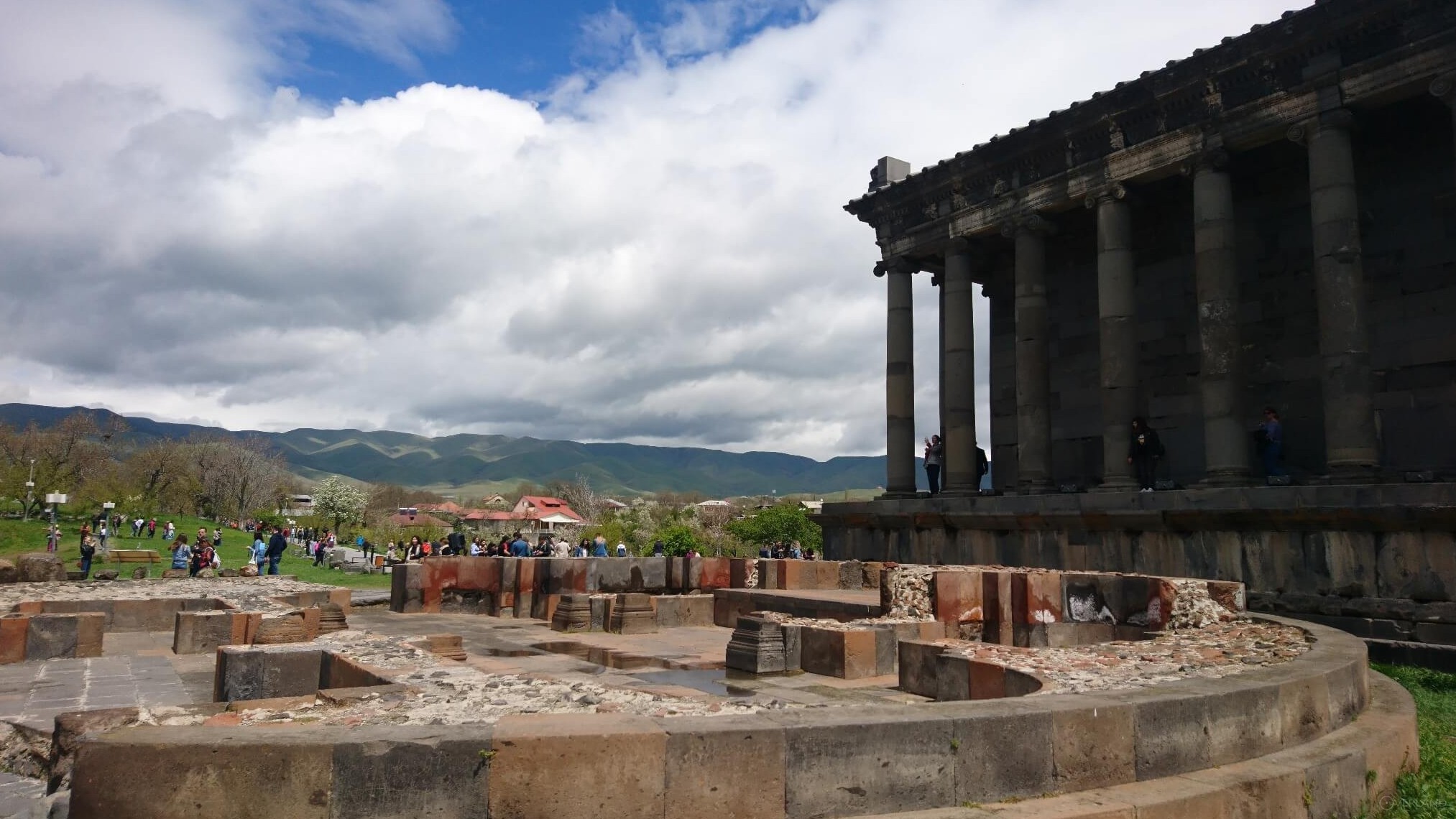 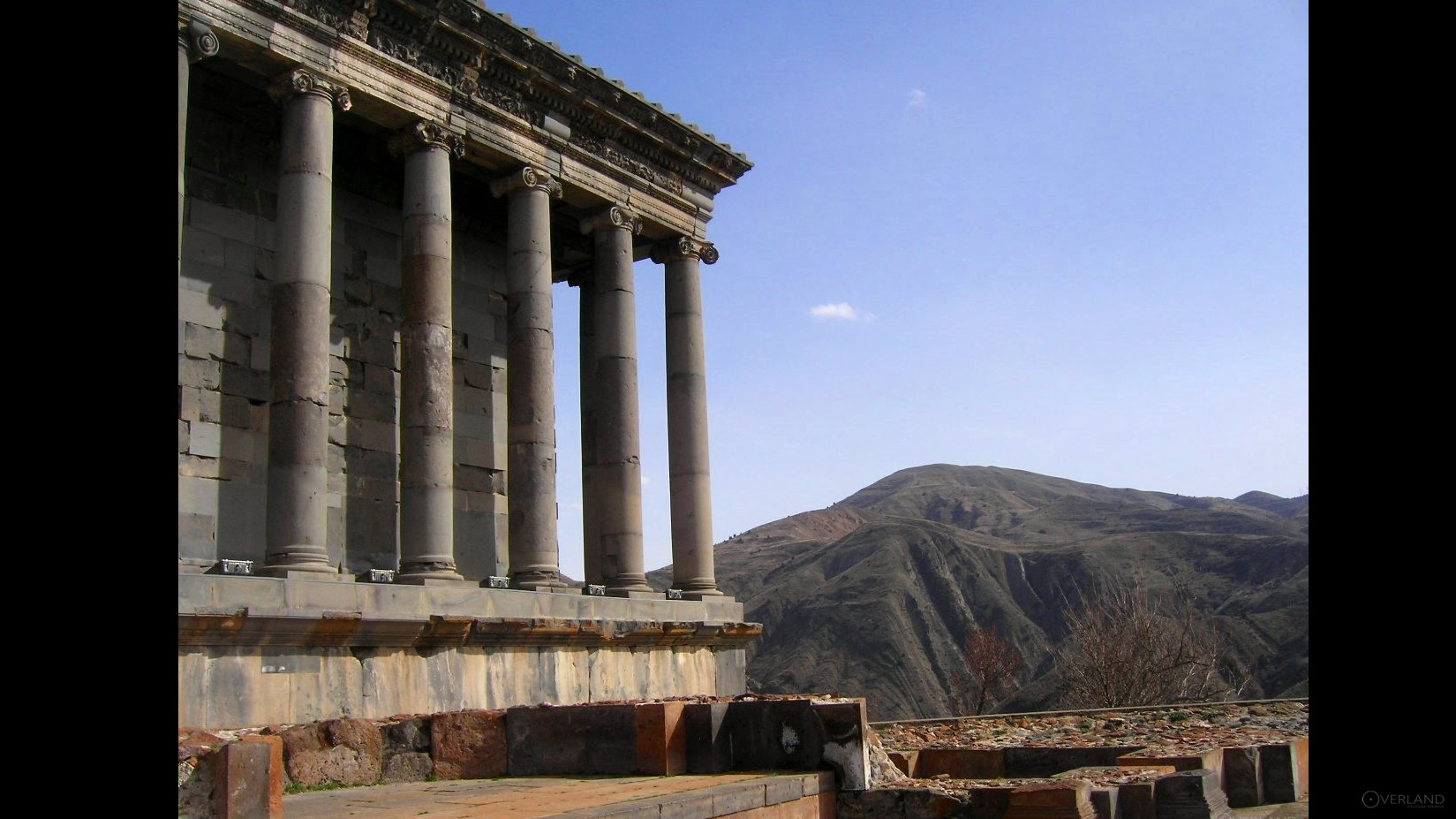 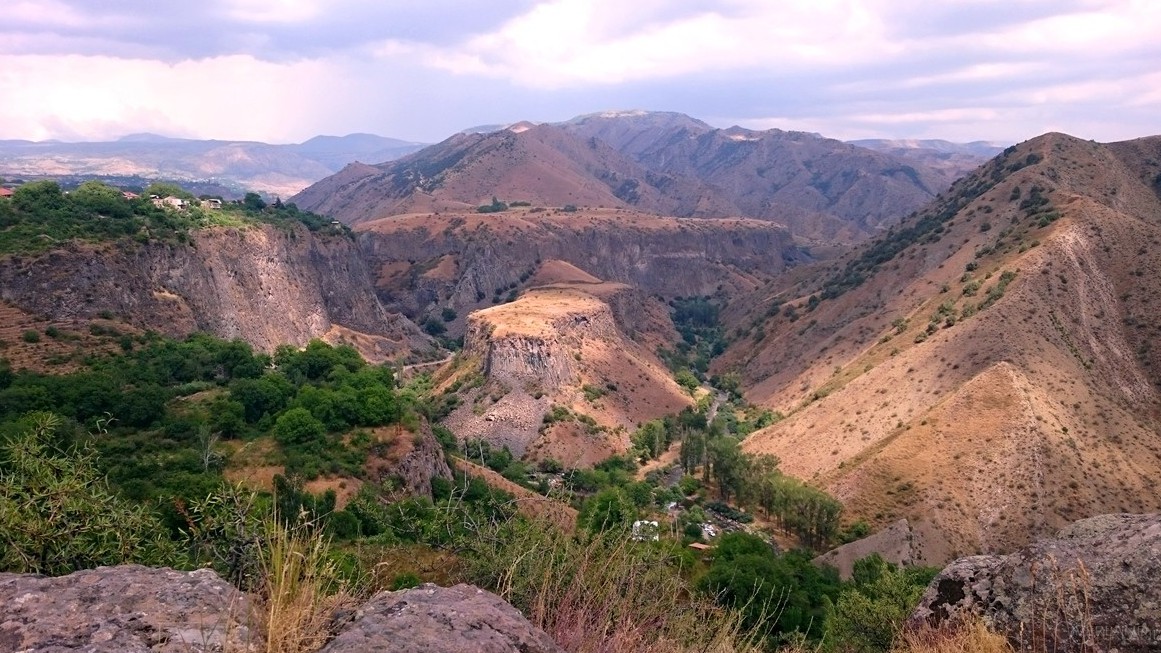 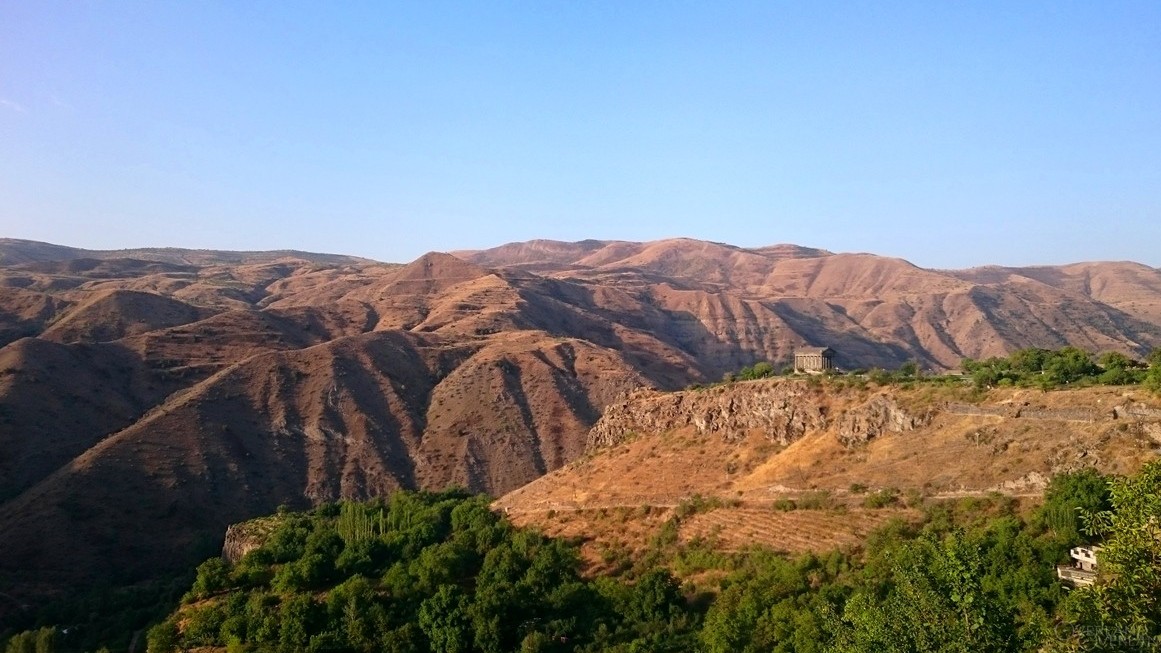 Thousands of kilometers from Rome and Athens, with their rich pagan pantheons and history, in the first Christian country is the only pagan temple in the former Soviet Union – Garni. Not only is the two-thousand-year-old temple amazing, but also the place where it was built.

According to legend, the construction of Garni is attributed to the grandson of the forefather Hayk-Gegham, from whose grandson-Garnik the name of Garni is derived. The complex, or rather the Garni fortress, is built on a triangular promontory, in the gorge of the Azat river, in one of the most beautiful places in Armenia. The edges of the Cape descend steeply to the bottom of the gorge, emphasizing the majestic appearance of the ancient temple.

The exact date when the fortress was founded is unknown. The first archaeological evidence found relates to a bronze age settlement. In the Urartian period, there was already a castle here. The ruins of the fortress that have come down to us belong to the III-II centuries BC. In the I century, the fortress was destroyed by the Romans, then in the 70s of the first century it was restored. For almost five hundred years, Garni was the summer residence of the Armenian kings. During the Arab conquests, the fortress was destroyed and then restored in the X century. The fortification system of the Garni fortress and the temple are of particular interest for scientific research on the degree of development of the architectural and construction art of that time.

The fortress was a reference point of the defensive system of the North-Eastern border of the Ararat valley. As with most defensive structures, in the case of Garni, too, natural features of the area were used in the construction – to enhance the protective properties. Although, looking at the organic nature and creation of man, it becomes clear that the aesthetic side was no less important.

The triangular territory of the Cape, which is also the territory of the fortress, is surrounded by the edges of the gorge on the South, South-West, and partly on the East side, while on the North, North-West, and West sides it is surrounded by a protective wall, about 315 m long.the Walls are more than two meters thick. They are built of huge stones (3-5 tons) of a bluish hue, which are connected to each other by metal rivets, which in turn are fixed to the stones with the help of lead. The walls had a height of 12-15 m, sometimes 25 m. in some places Now preserved wall height of 6-8 m.

The ancient temple, Palace and bathhouse were built in the southern part of the triangle. The square in front of the temple is open, and the temple has a particularly majestic view against the backdrop of high mountains. The ward consisted of several buildings. During the excavations, only part of the Foundation and basements were discovered. 50 meters from the chamber is a bath, consisting of four subsequent rooms. The first room, with a mosaic floor and a pool, was a lobby-dressing room. The second and third rooms were baths for cold and warm water. The fourth room was designed for hot water and for heating water. The principle was that a person starts bathing with cold water and gradually goes to hot water, then also returns. It should be noted that this principle of bathing in modern medicine is optimal for human health. The bath was warmed according to the hypocaustic principle common in the ancient world. Another important detail – the bath was built so that solar heat was also used. The mosaic in the first room is the only known example of pre-Christian mosaic art that has come down to us. It is made of stones of fifteen shades from the Azat river.

And finally, the temple dedicated to the sun God – Migra. The temple was built in 77 of the first century (during the period of elinistic influence), by king Trdat I. the Construction was carried out using the last word of the construction and architectural thought of the time. The Armenian kings in General, and Trdat I in particular, considered the sun God Migra as their patron God. Migra, as a symbol of light and truth, was often depicted in a fight with a bull (darkness). The common name of pagan Armenian shrines - mehyans (Mihr-mehyan) - is associated with the name of Migra.

The temple was destroyed during an earthquake in 1679. Stones and parts of the temple were scattered around the temple, which later allowed to restore the temple in its original form.

Interestingly, in the 1880s, the archaeologist, Prince A. A. Uvarov proposed to move the stones of the Garni temple to Tbilisi and restore the temple there ... Thank God, this did not happen!

The restoration of the temple began in 1969 and ended in 1975. All the remaining stones were used in the restoration of the temple and it took its original form – no details were modernized and even the stones that were added in place of the lost ones were not decorated. The temple became not only a tourist center, but also a subject of research of ancient Armenian Hellenistic architecture.

Garni belongs to the type of the periptera (surrounded by a columned prayer hall) are characteristic of Hellenistic architecture. The temple stands on a high pedestal. A nine-step staircase leads to the main entrance. The roof is covered with basalt slabs that are connected by lead rivets. In the Garni complex, the temple has a dominant position, and is located on the edge of the gorge - on a natural pedestal-rock. In contrast to the typical East-West location of ancient temples, Garni temple has a North-South orientation. There is an opinion that this is due to some unsolved cosmic phenomenon. The architects are of the opinion that this is due to the location of the temple on the triangular part of the fortress.

The temple consists of a pronaus (entrance), a NAUS-cella (main room), which is a rectangular hall measuring 5, 05x7, 98 m. the height of the cella is 7,132 m. there was a statue for worship. On the outside, there are columns with a height of 6.54 m-the total number of which is 24, which corresponds to the number of hours in a day.

The steps that lead to the temple have a height of 0.3 m, which is twice as high as the steps that are convenient to climb. It is assumed that this has a special meaning – a person to God or deity should rise slightly bowed, should make an effort and walk to the temple with a light heartbeat and fatigue, stop to rest and pray. In addition, the number of steps is odd, so that when you go up to the temple, you can enter it with your right foot – as a sign of good luck. On both sides of the steps there are two pedestals, which depict two athletes who seem to hold the temple on their shoulders. Under the temple there is a complex system of water drainage, for the removal of rainwater from the cella, which got there from the hole, which is located on the vaulted ceiling of the temple. The opening was made to allow light to enter the cell, although in temples of the Garni type, light came from the entrance, and in the case of the Garni, the size of the entrance compared to the internal space of the cell is large enough and enough light enters the temple to illuminate the cell. The architectural historian Auguste Choisy believes that temples where there are holes at the top, for the penetration of light, are dedicated to the gods who embody light.

Despite the fact that the Garni temple is similar to the monuments of the Hellenistic era, it is the brightest example of Armenian architecture of the ancient period. Some sources attribute the construction of the temple to masters from Rome, but the use of solid basalt in construction dates back to the Urartian period, while the Romans most often worked with marble.

After the adoption of Christianity, pagan temples were either destroyed or Christian churches were built in their place, but the temple of Garni was not awarded the fate of other similar structures. According to legend, the temple was preserved thanks to the sister of Trdat the Great (III), who loved this place very much and asked her brother not to destroy the temple. Trdat went to meet the request of his sister and ordered to destroy only the images of the God Migra, and leave the temple intact. 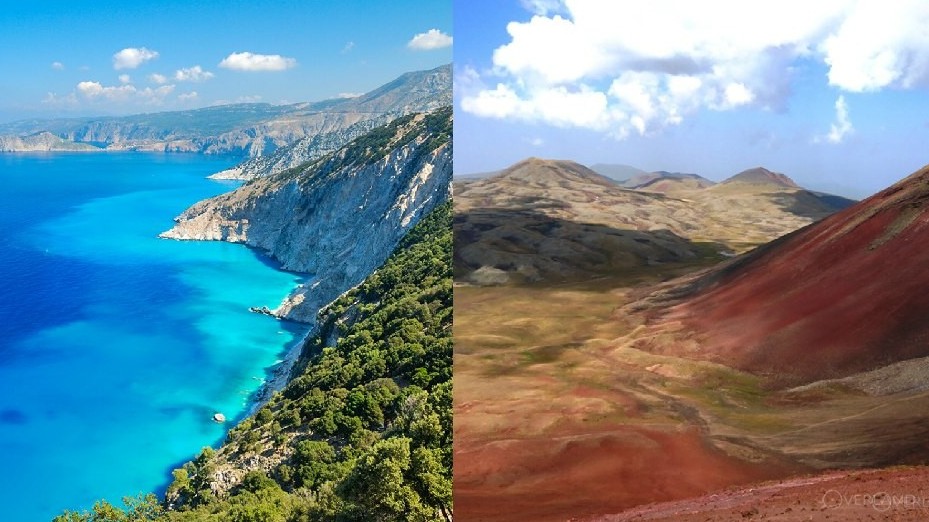 Armenia-Georgia Tour “ From mountains to sea” Price from 810 $