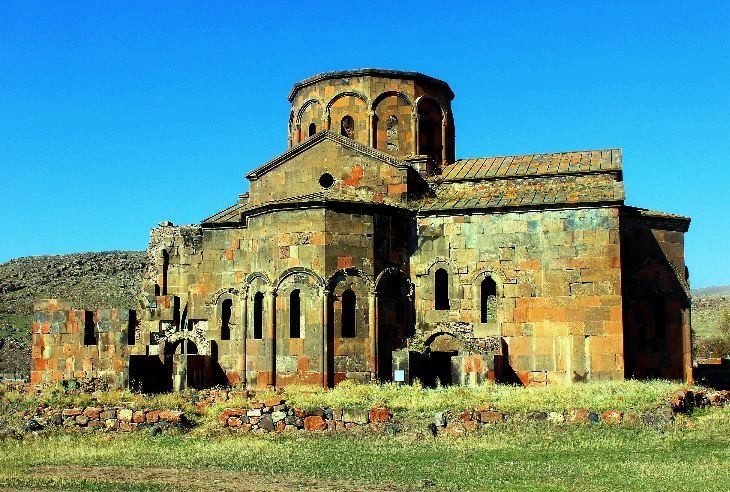 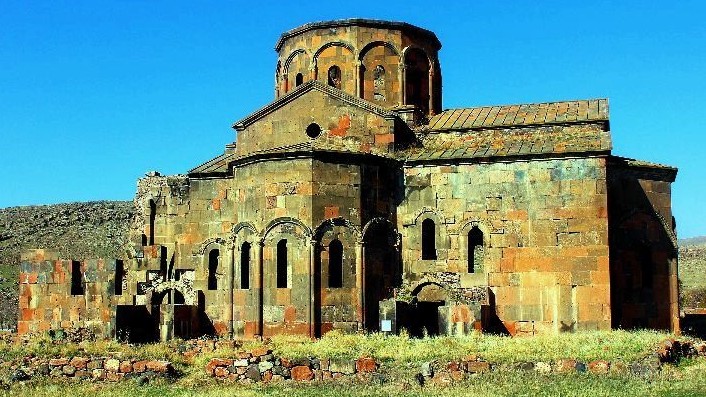 Talin's Cathedral complex Katoghike or Great Talin cathedral stands on the northern part of Talin city in Aragatsotn region. The complex consists of Katoghike, basilica church, a chamber and tombs.

Katoghike dominates on a smooth area, from the west of which opens a view to Mount Arteni and from the north- to the hills.
There are no historical data showing the date of Katoghike church foundation, but an analysis of the architectural characteristics indicates that the complex was probably built in the VII century. The construction is attributed to the royal family of Kamsarakan.

Talin's Katoghike differs from others with its rich and chic decorations- with its modest early medieval monuments. The church belongs to the type of "dome basilica". The plan of the church is cruciform inside. It was built from smoothly cut black and red tuff. The inner part is divided into main-high and wide, two side and low arched aisles with two rows of columns. The main altar has the form of a pentahedron, and 2 sidelong altars- square forms, their tops were served as hiding places.

The church has 5 entrances- one from the west and 2, each from the south and north. Katoghike stands out for its rich decoration, windows, ledges and for unique western facade. There are preserved remains of frescoes in the church. According to saved notes, they were made by request of Movses Khorenatsi. The most famous frescoes are <<Christ in Majesty>> and <<The Entry into Jerusalem>>.

The next object of the complex is a single-nave basilica, situated in the north from Katoghike. It was opened in the times of repairs in 1970-75. The remains of the structure are dated back to the V century.

At 150 m south-east from Katoghike a chamber dating from the 9-11th centuries was found. Only the ruins of the wall were preserved.
The tomb is located in the north and west parts of Katoghike. It is rich with tombstones and khachkars of the IV-VII centuries.