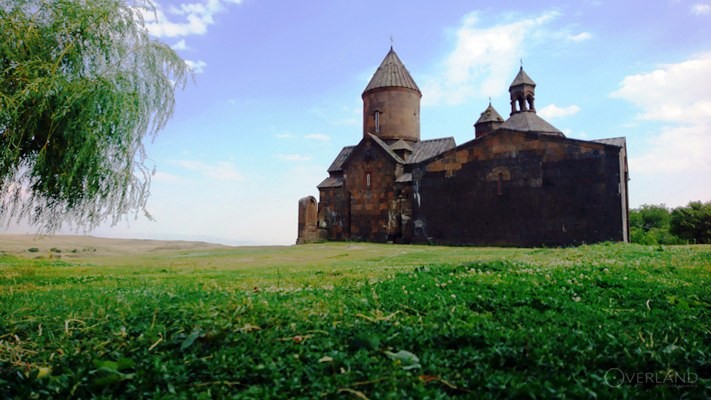 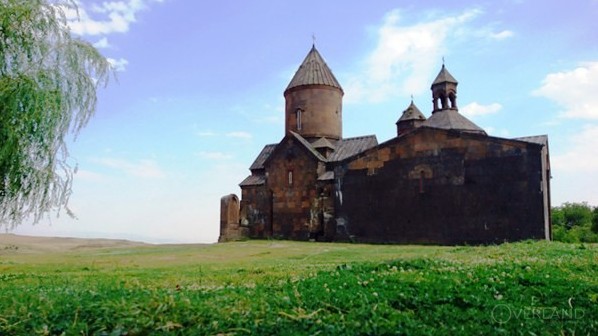 According to the legend, on the right bank of Kasakh river, there was an island, where angels lived. Gregory the Illuminator saw this place from Aragats peak and in the IV century he built a church. Gathering monks in the monastery, he thought them how to sing psalms. From here, comes the name of the monastery- saghmos-psalm.

The monastery stands on the edge of a deep gorge, on the eastern part of Saghmosavan village. With its majestic view, the monastery stands out from the surrounding picturesque landscape. During the invasion of Seljuks (1064-1211), the activity of the monks of Saghmosavank was being concentrated on a cave complex in Kasakh river's gorge.  Here, in the XII century, monks founded the cave desert of Sagmosavank and were engaged in copying manuscripts.
St. Sion church was built in 1215. The architect of Sahmosavank, built the dome of the church in such a way that it could have a movement of 10 cm, so that the dome wouldn't collapse during the earthquakes.
Then, from the western side, a porch was added.  Also, the church built by Gregory the Illuminator was restored. In Sagmoavank, Matenadaran was founded - a place where manuscripts were kept, and it also became necessary to build a library for an even more expanding collection of manuscripts. The church-library St. Astvatsatsin was built this way.
The territory of the monastery was separated by a wall, from which only several parts have survived.
Most of Saghmosavank khachkars were colored with Armenian red cochineal. This symbolizes  Christ's blood on the cross.
The presence of a library and a rich collection of manuscripts in Saghmosavank create all conditions for educational activities and from 1267 a great monkish school starts to work.
So, Saghmosavank becomes an important spiritual, cultural, educational centre of medieval Armenia and remains so until the eighteenth century.
Due to the fact that Saghmosavank was considered to be a historical and architectural monument, in Soviet times it avoided the fate of other monasteries and wasn't turned into a storehouse, but served as a tourist centre.