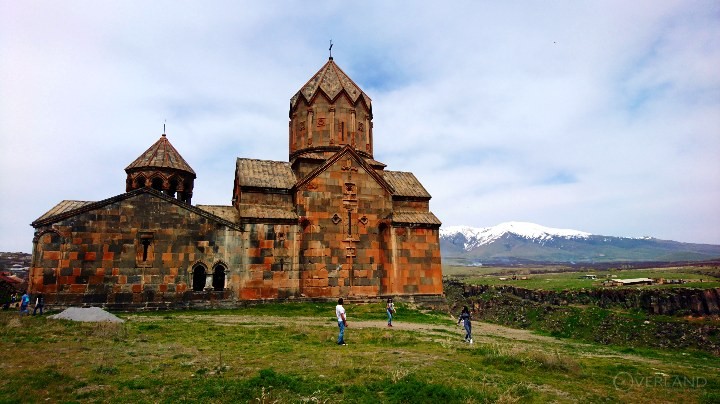 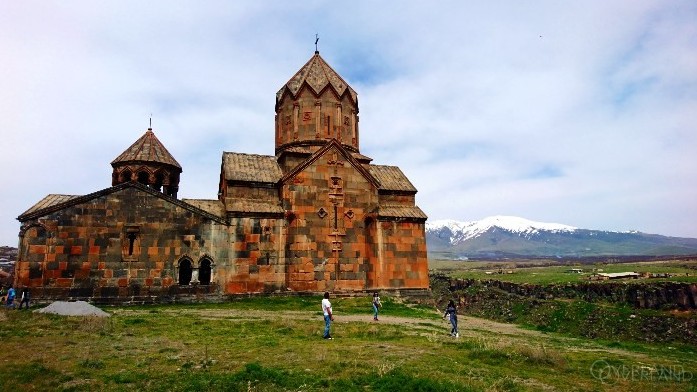 Hovhannavank rises on the edge of a picturesque plateau, on the right bank of Kasakh river's gorge. The beauty of the monastery is emphasized by the successful use of relief features during the construction. So, the modestly decorated eastern wall is smoothly continued with a picturesque rock, descending to the river valley...

Generally, the places for temples, monasteries and chapels construction weren't chosen by chance. These places have a special attractiveness, which our ancestors felt somehow... Hovhannavank wasn't accidentally built in the place of a pagan temple, which was dedicated to the Armenian goddess of water, love and beauty - Astghik.
The monastery was built by Gregory the Illuminator in the IV century. He brought here some relics parts of John the Baptist.
The monastery of Hovhannavank is one of the most important historical and architectural monuments of Armenia.
The oldest structure of the monastery complex is the basilica of St. Karapet, built in the IV century. According to the legend, Gregory the Illuminator established the place. He had a special love to that gorge. The church itself was built in 573, and then it was rebuilt in the XVII century by the Vachutyans dynasty, who decided to leave their mark here by carving their emblem- a dove in eagle's claws.
On the south side, the main church adjoins the basilica, which was built in the XII and XIII centuries with particularly exquisite bas-reliefs. Also, here was a secret passage leading to the gorge of Kasakh river. There's a legend about this secret passage.  During the attack of the conqueror, people ask for entering the temple and praying there for the last time.  Entering the temple, through its secret passage they get to the river's gorge.
In the XII century, a wall was raised around the monastery. It was fortified by towers, which were preserved until our days.
The last buildings built in the XVII-XVIII centuries were school and monastic brethren, which weren't preserved.
As in many monasteries of Armenia, in Hovhannavank also, monks were engaged in the reproduction of manuscripts. About twenty manuscripts written in Hovhannavank have survived to our days and now are kept in Matendaran.
In the gorge of Kasakh River, between the monasteries of Saghmosavank and Hovhanmavank, there is a cave complex, which people call a red temple, probably because of the red tuff. According to official data, this is the cave monastery of Holy Mother of God, which dates back to the XII century. And it is also mentioned to be the desert of Saghmosavank cave. In the second half of the XII century, Hovhannes Mundj (voiceless) founded a desert here.
Supposedly, the monks here were busy with copying manuscripts.
Like all cave monasteries, this monastery also has its own small cave church.
The large hall was the main one in the cave complex, where monks dug out niches, which were most likely places for copying and writing manuscripts. A narrow opening leads to the second floor, from where you can see the gorge.
Unlike other cave monasteries, the life of this monastery didn't last long. As if the monastery was created for a special purpose, by finishing which the monks left it.
Churches, abandoned chapels in Armenia are occasionally visited by pilgrims and tourists and there's no matter how far they are.
In this place, there are no pilgrimage signs, as if people had forgotten about it. Presumably, the work that started in the cave was continued in Saghmosavank, which became one of the most important spiritual and educational centres of medieval Armenia.