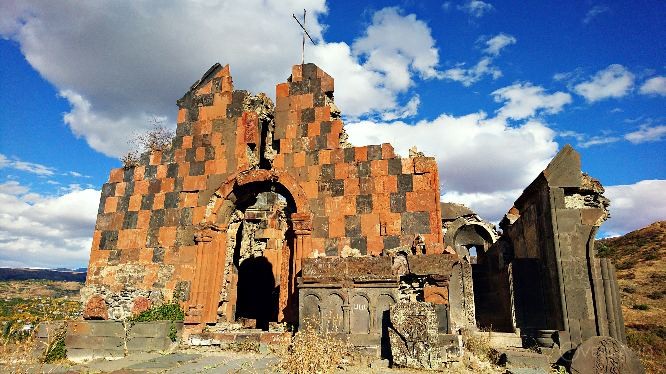 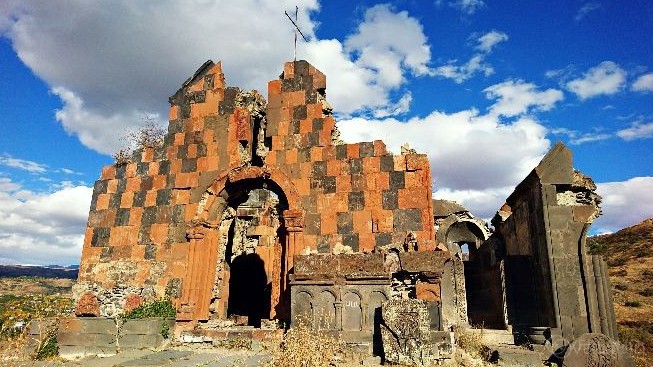 According to a legend, the monastery Havuts Tar was built by Sahak Partev and Mesrop Mashtots in the V century. And in the X century, it was rebuilt and given to a new life. The monastery is located opposite Goght village, between Garni and Geghard - in Khosrov reserve, created in the IV century.

The origin of major Armenian monasteries' and Havuts Tar's history are notes of historians, wall inscriptions, inscriptions on the grave-stones and in manuscripts. At different times, many historians mentioned the monastery in their works. The wall notes and manuscripts written in Havuts Tar contain a lot of factual material, too.

Standing on the hills, on the left bank of Azat river, the monastery consists of 4 grouped monuments, standing at a distance of 100, 200 and even 500 meters from each other. In the neighborhood, there were soils, villages and small gardens that belonged to the monastery.

Havuts Tar monastery was famous in the middle of the century, thanks to the wooden engraved cross "Amenaprkich", which was given to the Armenian king Gagik I by the Byzantine king Basil. In the XIII-XV centuries, the monastery was a famous centre for creating manuscripts, and many manuscripts have survived to our days. Here, one of the oldest holistic Gospels was written in Armenian- “The Gospel of Wehamor”, which, presumably, was written in the VII century. Now, the Gospel is kept in the Institute of ancient manuscripts of Matenadaran.

The main church of the western group (XIII century) has a cruciform shape inside. The dome of the church is destroyed. The walls are made of multi-colored stones, and they are rich in wall inscriptions. On the northern side, there are two chapels adjoining the church. But they are destroyed now.

In the centre of eastern monuments' group stands the unfinished church of St. Karapet, construction of which wasn't finished because of Lezgins invasions. On the southern side of the church, there are chapel and porch ruins. In the Armenian architecture, there was a principle, according to which during the construction of temples, church was built the first, and then, on the east side, the porch was built. In Havuts Tar, the opposite was true. The porch is the monastery's oldest structure.